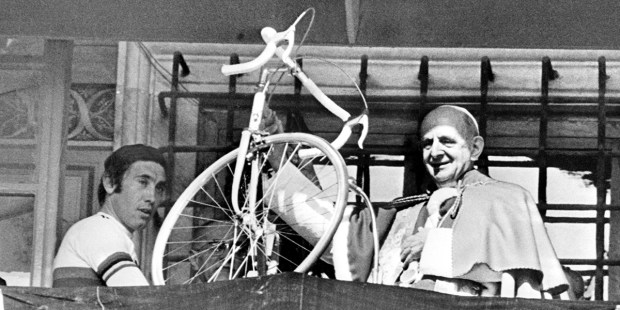 The popes have, in various ways, been fans of cycling ever since the bicycle was invented!

Can a priest ride a bicycle? The question was asked at the beginning of the 20th century in a French magazine for priests—spotted by historian Catherine Marneur—L’ami du clergé (“The Friend of the Clergy”). It was a response to the astonishment that gripped the whole of European society at the advent and success of this strange two-wheeled vehicle. The Church, cautious at first, did not issue a judgement: “The Holy Office has not yet given its opinion on the bicycle. Above all, we must take into account the effect it will have on the population.” Doubts did not remain for long, and by 1948, when Italian writer Giovannino Guareschi had created his popular fictional priest character Don Camillo—a fan and user of bicycles—no one doubted the complete compatibility of the cassock and the pedal stroke.

Cycling quickly became a highly popular sport, as evidenced by the success of the newly created Tour de France in 1903 or the Giro d’Italia (Tour of Italy) in 1909. It was a craze that would quickly spread beyond the Leonine Walls of the Vatican, even if no one has yet dared to transform the steep paved paths of the Vatican Gardens into a biking course until now. On the eve of the 2013 conclave, we saw Cardinal Philippe Barbarin, cyclist and archbishop emeritus of Lyon, arrive on his famous bicycle and park it at the entrance to the small state.

Pius X (1903-1914) rightly believed that behind all these sporting passions that flourished in his time, there was something profoundly Christian that the Church had to take hold of. Pius X blessed an amateur race starting from Rome, and his successor Benedict XV (1914-1922) imitated him a few years later. Cycling was from then on perceived as a virtuous practice.

However, the papal passion for cycling took on a whole new dimension with another pope, Pius XII (1939-1958). He’s famous for having had a small chapel built in 1948 on the heights of the Ghisallo pass, the equivalent for the Tour of Lombardy of the mythical Galibier pass of the Tour de France. He named the building “Our Lady of Cycling.”

During this period, an intriguing figure appeared: Gino Bartali, a champion road cyclist known as “Gino the Pious.” After Bartagli’s death, his family discovered that the double winner of the Tour de France had been one of the humble and silent servants of those most vulnerable during the hidden struggle of the Catholic Church against Mussolini’s fascism and Hitler’s Nazism during the Second World War.

Transporting false papers for the Vatican inside the frame of his bicycle, he delivered them to various monasteries to allow the escape of Jewish families. Gino Bartagli is now recognized as “Righteous Among the Nations” by Israel.

Transporting false papers for the Vatican inside the frame of his bicycle, he delivered them to various monasteries to allow the escape of Jewish families. Gino Bartagli is now recognized as “Righteous Among the Nations” by Israel.

Paul VI, the theologian of the meaning of the race

The successor of Pius XII, John XXIII, was not a sporting pope. Paul VI (1963-1978), on the other hand—a fervent advocate of physical exercise—was a worthy successor to Pius XII in this respect. In particular, he acknowledged having had a real passion for this sport since his early childhood. In 1964, he gave a very inspired speech, specially addressed to the racers at the start of the Giro d’Italia, including the famous Félix Gimondi and Eddy Merckx:

“Sports […] are the symbol of a spiritual reality, which constitutes the hidden but essential fabric of our lives: life is an effort, life is an ordeal, life is a risk, life is a race, life is hope for a goal that transcends the scene of common experience, which the soul glimpses and religion presents to us.”

Pope John Paul II, a great sportsman and amateur cyclist, took up the torch in a completely different way. It was during his pontificate that the first revelations of the use of doping products in cycling competitions came to light, discrediting somewhat the practice of the sport.

The Pope suggested to Ivano Fanini, the young director of an Italian cycling team, that he name his team Amore e vita (Love and Life, in Italian), because according to the pontiff, sports are a powerful affirmation of these two Catholic principles

Fanini took the Pope at his word. Displaying on his team’s jersey no longer a sponsor, but a message of faith that looked like the name of an encyclical, the Amore e vita team stands out in these years when the lure of gain and the obsession for individual performance, even to the point of cheating, seems to corrupt on all sides the beautiful sporting ideal once so loved by Paul VI and Pius XII.

Ivano Fanini, a devout Catholic, even decided to adorn his jersey with a pro-life message for an entire season! More generally, Amore e Vita is an extraordinary team, which has decided to give a second chance to athletes who have been banned for doping, and who too often serve as scapegoats in a sport where too few seem to be clean anymore. Amore e Vita proposes to forgive once the sentence has been served.

Pope John Paul II met with Fanini more than 20 times. Fanini’s team doesn’t have the greatest track record in the history of cycling. However, unlike so many others, it still exists, demonstrating the fighting spirit so appreciated by the public, for which a red jersey is often awarded today in stage races.

Since the end of John Paul II’s pontificate, the bicycle has been less in the spotlight. Benedict XVI, it is said, prefers Formula 1. Pope Francis, a fervent soccer fan, was nevertheless asked, as soon as he was elected in 2013, to bless the pink jersey worn by the leader during the Giro d’Italia. While he may not speak as inspired words on the meaning of racing as Paul VI, the current head of the Catholic Church insists eloquently on the need to rethink urban transportation.

With Laudato Si’, he invites the world to leave behind forms of transportation that generate pollution. In this encyclical, the pontiff also urges us to find alternatives by thinking creatively: the bicycle seems to be a good candidate to limit excessive and polluting energy consumption of hydrocarbons, while allowing real mobility in cities. More generally, the defense of the “common home” proposed by the head of the Church seems to appeal to cyclists: Slovenian Peter Sagan, a superstar bicycle sprinter for the last 10 years, decided to offer a bicycle painted in the colors of the Vatican as well as his world champion jersey—the mythical rainbow jersey — to the Argentinian pope during a visit in 2018. Perhaps he should have opted for a green jersey?

Read more:
Why Pope Benedict XVI was known as the “Green Pope”