Did you know a 20th-century pope climbed Europe’s 2nd highest peak? And it wasn’t JPII 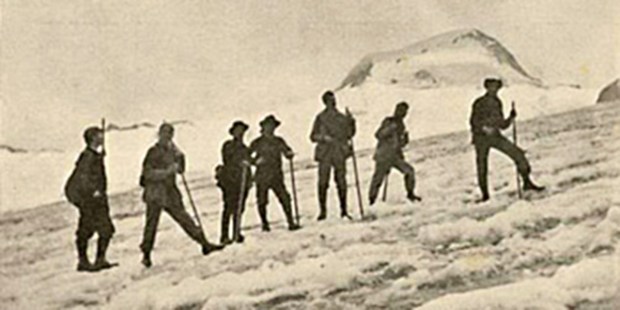 Sports popes love (Part 2): Pius XI considered that mountain climbing (if done prudently) was the greatest exercise for both soul and body.

Since the beginning of the 20th century, the Holy See has shown a singular interest in sports. The various popes have all looked upon this social phenomenon with a benevolent, even passionate eye, sometimes even detecting in it a means of evangelization or Christian perfection. In this article—one of four in a series telling you stories about sports in the Holy See—we look at mountain activities.

Many popes have been attracted by the mountains, and each one retreated there for his own reasons. John Paul II went for his long walks, Paul VI to find a simplicity of life, and Pius XI—an experienced mountaineer—was looking for personal growth.

In 1890, when mountaineering was just barely becoming a sporting activity no longer reserved for mountain dwellers, Ambrogio Damiano Achille Ratti (the future Pope Pius XI, 1857-1939) achieved nothing less than the ascent of Mont Blanc, the second-highest mountain in Europe. The ascent lasted two days, including a night in the Quintino-Sella cabin on the Italian side. During the descent, he opened a new passage to the summit of Mont Blanc.

Ambrogio Damiano Achille Ratti (the future Pope Pius XI, 1857-1939) achieved nothing less than the ascent of Mont Blanc, the second-highest mountain in Europe.

An experienced mountaineer, he made numerous mountain expeditions, including one of the first crossings of the Monte Rosa massif (the second highest mountain in the Alps, after Mont Blanc, located between Switzerland and Italy) on the Macugnaga slope (in Italy) in 1889.

The importance he gave to this sport can be seen in the letter Quod sancti of August 20, 1923, addressed to the Bishop of Annecy, in honor of St. Bernard of Menton, who was proclaimed on that occasion the patron saint of mountaineers:

Indeed, among all the exercises of honest sport, none more than this one—when one avoids imprudence—can be said to be beneficial for the health of the soul as well as of the body. While with hard work and effort to climb where the air is finer and purer, strength is renewed and invigorated, it also happens that, by facing difficulties of all kinds, we become stronger to face the duties of life, even the most demanding ones. Contemplating the immensity and beauty of the spectacles that open before our eyes from the sublime peaks of the Alps, our soul easily rises to God, the author and Lord of nature.

This great value given to contemplation and the search for pure air was shared by John Paul II, who never stopped visiting the mountains throughout his pontificate, an activity he’d begun long before. Tadeusz Styczen, one of his close friends, recounts that when they were skiing in Poland, then-Archbishop Wojtyla preferred to go up the slopes on foot, his skis on his shoulder, to remain in total silence and meditation.

For him too, the mountains represented “a school of spiritual elevation,” in the words of the Bishop of Ventimiglia and Sanremo, Alberto Maria Careggio. Passionate about mountaineering, this bishop was the first organizer of the Pope’s summer holidays in Valle d’Aosta, and his faithful companion.

According to him, it all began during a pastoral trip by the Polish Pope to Valle d’Aosta on September 6-7, 1986, as part of the celebrations for the bicentenary of the first scaling of Mont Blanc. “On that occasion, the pope had his first contact with the valley, and from the top of the Brenva glacier, at an altitude of 3,550 metres, he was able to admire the imposing mass of Mont Blanc, thus falling under the spell of the Alpine massifs and peaks.”

From that date on, the Aosta Valley became the favorite destination of John Paul II. In fact, he returned there a good 10 times between 1989 and 2004, a period during which he did not hesitate, when his health allowed it, to put on his skis and go down the slopes of the Italian resorts.

He wasn’t the archbishop, “but our uncle”

It was to the Swiss mountains, to Engelberg, that Paul VI liked to go, long before he became pontiff. The environment he found there, it is said, relieved him of the psychological tensions inherent in his great responsibilities within the Church. His niece, Chiara Montini Matricardi, who accompanied him, testified to the wonderful atmosphere there. “It wasn’t the archbishop who was with us, it was our uncle. He played with us, and we’d have breakfast together.”

At the end of the 19th century, Pope Leo XIII proposed the construction of 20 monuments as a grandiose homage to God, to be built on 20 mountains in different parts of Italy. The idea was immediately accepted by the various dioceses, which set up a committee to decide on the 20 sites where the monuments were to be located, even going so far as to draw up further maps of the sites. Among them, a monument to the Redeemer was built on Mount Guglielmo. Pope Paul VI visited it many times in his youth with his father. Years later, he had that little chapel renovated, where he had unforgettable memories.

Benedict XVI had his own way of living in the mountains. In addition to seeking an atmosphere conducive to reading and study, the German pontiff took long walks every day. The mountains, he told a delegation of professional skiers in November 2010, “make us feel small, restore us to our true dimension as creatures, make us capable of asking ourselves about the meaning of creation, of raising our eyes upwards, of opening ourselves to the Creator.”

Read about the popes and cycling here.