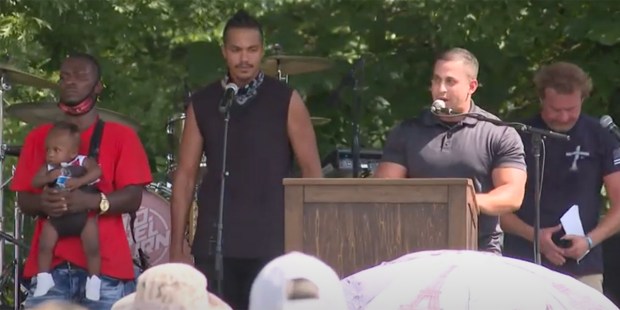 Sometimes difficult situations bring out the best in humanity.

During protests in June, Officer Galen Hinshaw of the Louisville Metro Police Department in Kentucky responded to a call for help from an officer who was blocked in his police cruiser surrounded by angry protesters. Things may have ended very differently for Hinshaw if it weren’t for the bravery of five members of the crowd.

As Officer Hinshaw got out of his own vehicle to try and calm the situation, he found himself backed against a wall with nothing blocking him from the crowd of protesters. Hinshaw, who is a Fourth Division patrol officer, understandably panicked as he stood there alone waiting for more backup. In the very short time before help arrived, the police officer prepared himself for the worst.

Read more:
Police officer comes to the rescue of homeless man on his way to a job interview

While crowds shouted at him and demanded answers to their questions and frustration, Hinshaw tried to calm them by sharing his own feelings: “I’m sorry, I’m sorry you feel this way.”

The 32-year-old could see that the crowd could turn on him at any point and prepared himself to be injured, as he explained to USA Today.

One of the protectors was Darrin Lee Jr, an entrepreneur, who explained: “I really thought at that moment, ‘Protect him. It really isn’t his fault.'”

As someone questioned why Lee had stepped in to help the police officer he became scared himself. But as fellow protector, Ricky McClellan shared: “A human was in trouble, and right is right.”

In what was a period of just two minutes, Hinshaw found himself protected by a group of men who risked their own lives to stand up for what is right. As local businessman De La Cruz pointed out when explaining the reasoning behind his actions: “If I can hold my brothers accountable, if I can march with my brothers and turn against them to say, ‘This isn’t right,’ that’s where the accountability comes in.”

Thankfully Officer Hinshaw’s squad quickly arrived and led the officer to safety. Following the event, a thankful Hinshaw wanted to reach out to express his gratitude to the men personally, as reported in Mission Hero. So last week he was able to meet De La Cruz, Lee, and Christopher Gales.

And the heroic actions of both Officer Hinshaw and his five heroic “guardian angels” sum up quite beautifully what we should expect from each other in our daily lives: to look out for each other, to stand up for what is right, and to treat each other as brothers and sisters in Christ.

Read more:
Police officers pay for food that a man stole for his child