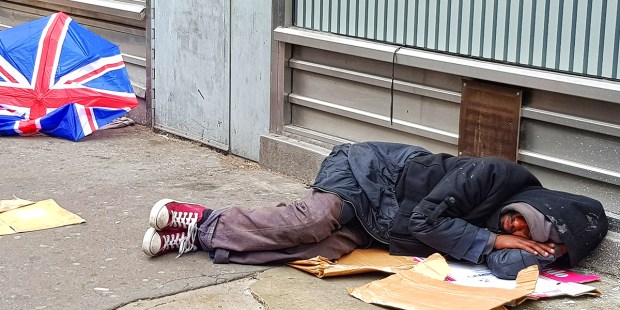 The pandemic has led to a surge in homelessness, especially in immigrant communities.

The coronavirus world pandemic has had harsh repercussions for the citizenry, especially for those who work in service industries. These jobs are traditionally some of the lowest paid, and once the work dried up, workers’ savings were quick to follow. This, in turn, has led to a surge in homelessness in England, most prominently displayed on the streets of London.

Catholic News Agency reports that part of the problem is that so many of the homeless are categorized as having “no recourse to public funds,” which means they do not have eligibility for government assistance and services. Of the 15,000 homeless who were afforded hotel accommodations at the start of the pandemic, roughly one third have “no recourse to public funds.” CNA spoke with Fr. Dominic Robinson, pastor of Farm Street Church in Mayfair, who said:

“There are a large number of newly homeless on the streets who have lost jobs, especially in places like the hospitality sector, who fall into a category of ‘no recourse to public funds.’ This is largely because of their unsettled status. Their status as a refugee hasn’t been verified yet.”

Father Robinson went on to explain that the Catholic Church has been advocating that the British government lift the restrictions on public funds so that they might flow towards the homeless, a group in dire need of consideration in these uncertain times. Over the course of the pandemic, the priest has continued to serve the homeless community, whose numbers he sees swell every day. He commented to CNA:

“It also breaks your heart — as it has done for a lot of our volunteers — to see young men and women in their 20s and 30s who have lost jobs, who have broken relationships, who’ve lost their way in society during this dreadful crisis.”

Father Robinson finally highlighted three ways in which all Catholics can come to the aid of those who have so recently lost their homes: prayer, awareness of the reality of homelessness, and donations to Catholic Charities.