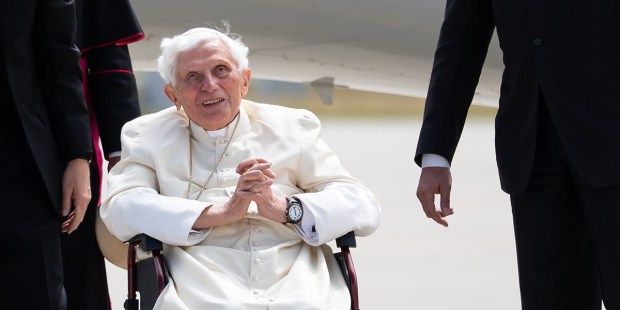 Biographer reports that his voice is frail, though his mind is sharp and he is feeling optimistic.

The author of a biography of Benedict XVI due out in English in November was able to visit the pope emeritus on August 1 and reported to a German newspaper that Benedict is suffering from an infection that has caused a painful rash on his face.

The 93-year-old pope emeritus has erysipelas on his face, according to biographer Peter Seewald, as reported by German Passauer Neue Presse. The infection, relatively common in the elderly, causes a painful red rash and can cause other symptoms. It’s treated with antibiotics.

Benedict XVI left the Vatican this summer for the first time since his 2013 retirement. He went to visit his older brother, Georg Ratzinger, in their native Germany. Just a couple weeks afterward, on July 1, his brother passed away.

Read more:
‘For all that you have done, suffered, and given me’: Benedict’s farewell to his brother

Seewald said that Benedict has been “extremely frail” since his return from Germany. He also said that his voice is now barely audible.

Nevertheless, his mind and memory are sharp, the biographer said, and Benedict XVI continues to be optimistic, even saying that if his strength returns, he will take up writing again.