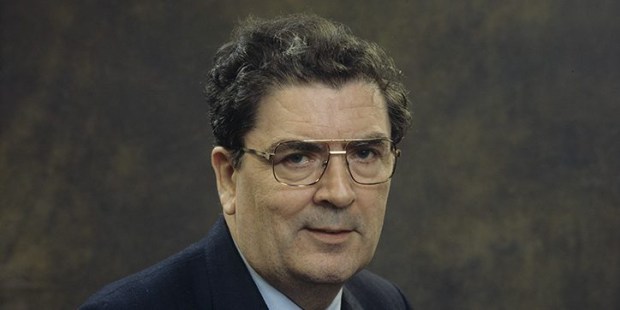 He received a Nobel Peace Prize — and a papal knighthood from Pope Benedict XVI — for his efforts to bring peace to Northern Ireland.

John Hume, one of the key figures in creating the foundations of the 1998 peace agreement that ended decades of sectarian violence across Ireland, died Monday in his native Derry, Northern Ireland. He was 83. Hume, a Catholic who once studied for the priesthood, received the 1998 Nobel Peace Prize along with the Protestant leader of the Ulster Unionist Party, David Trimble.

Hume had suffered in his later years from dementia.

“In his campaign for peace, inspired by the example of the Rev. Dr. Martin Luther King Jr., he employed a winning combination of public exhortation against the violence of the Irish Republican Army and secret diplomacy with its political leadership, sitting down for talks in his modest rowhouse over coffee,” the New York Times reported. “Deftly and persistently he enlisted the White House to help him reach his goal.”

Hume and Trimble’s efforts led to an end of years of fighting known as the Troubles, which left more than 3,600 people dead. Hume was so widely regarded throughout Ireland that he beat out even U-2 singer Bono in Irish national broadcaster RTÉ’s public survey to find the greatest person in Ireland’s history. Pope Benedict XVI bestowed a papal knighthood upon him.

The Times summed up his approach:

Throughout a career in Northern Ireland politics, in which finger-pointing and recrimination amplified a drumbeat of bombings and killings, Mr. Hume stood as a voice of reason, counseling against the cycles of bloodshed between the Protestant majority and the Roman Catholic minority.

“An eye for an eye leaves everyone blind,” he said, attributing the comment to Dr. King.

He argued instead for dialogue and reconciliation to still the furious conflict that pitted the I.R.A. against Protestant paramilitary groups and thousands of British Army soldiers. “We have to start spilling our sweat, not our blood,” he declared.

Hume was the longtime leader of the Social Democratic and Labour Party, which he had helped found in 1970. Although he began his career as a French teacher, in 1968 he joined a movement to protect the civil rights of the province’s pro-Irish Catholic minority, fighting against discrimination by the pro-British Protestant majority in everything from housing to education, Reuters reported.

In the late 1980s and mid-’90s, he held secret peace talks with Gerry Adams, the head of the I.R.A.’s political wing, Sinn Fein. The Times reported:

Mr. Hume’s essential achievement was to convince Mr. Adams that if the I.R.A. renounced violence, Sinn Fein could join peace talks from which it had long been excluded, gaining a yearned-for political legitimacy. The effort was part of a complicated international process. The British government had itself been conducting unpublicized back-channel contacts with Sinn Fein.

“Central to the discussions from my point of view was violence,” Mr. Hume said. “I kept asking for the reason for it. … The whole objective was to bring about a total cessation of violence. We eventually agreed on that. Then the question was, How to get there?”

It was a big risk to his own reputation that Hume brought Adams into talks, as the Sinn Fein leader was suspected of being an I.R.A. commander, a charge Adams always denied.

The I.R.A. announced a “complete cessation of military operations” in 1994. In September 1997, Sinn Fein sat down with the leaders of Protestant parties for the first time since 1922, when Ireland was partitioned into an independent Irish Republic in the south and the British-run province in the north.

Finally, the peace accord was signed on Good Friday 1998.

This was not the first time Hume was involved in negotiations that led to major changes. in 1985 he was instrumental in preparing the Anglo-Irish agreement, which gave the Irish Republic a consultative role in the affairs of Northern Ireland. It also guaranteed that no change in the British territory’s political status could be made without the consent of its Protestant majority.

Upon Hume’s death, tributes poured in from political and religious leaders.

David Trimble told the BBC that from the outset Hume urged people to stick to their objective peacefully.

“He was a major contributor to politics in Northern Ireland, particularly to the process that gave us an agreement that we are still working our way through,” he said.

Archbishop Eamon Martin of Armagh, the Primate of All Ireland, called Hume “a paragon of peace, a giant of a statesman whose legacy of unstinting service to the Common Good is internationally acclaimed.” Hume put Catholic Social Teaching into practice, working ceaselessly for “a process of reconciliation through which the dignity of every human person is recognized and upheld,” the archbishop said.

Bishop Noel Treanor of the Diocese of Down and Connor said that Hume was “motivated by a strong personal faith” and was “a champion of human rights.”

In a statement issued on the website of the Irish Bishops’ Conference on Monday, Fr. Paul Farren, Administrator of the Cathedral of St. Eugene in Derry said the Hume family expressed their concern that a public gathering for the funeral might put people’s “health at risk in the context of the current Covid-19 pandemic.” Instead, the family asked that people stay home and take part in a “Celebration of Light for Peace.”

“Instead of lining roads and streets to show respect to John, it is the wish of the Hume family that we remain at home and, at 9:00 p.m., light a candle and join with the family to pray the Prayer for Peace of St. Francis of Assisi in the presence of John’s body in the Cathedral,” said the statement. This Celebration of Light for Peace “is a fitting tribute to a much loved and distinguished Irishman.”