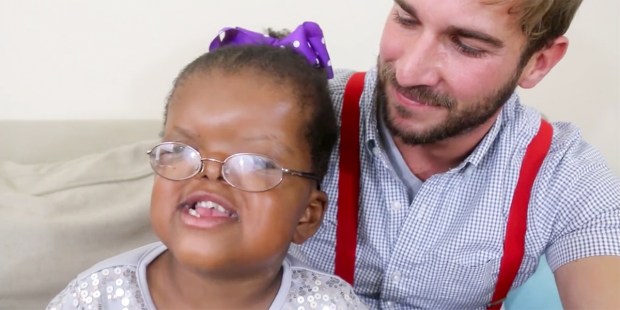 Born with Apert syndrome, little Lola wants to be seen as a person of dignity and worth, as she shares in this heartwarming account.

Lola is a 5-year old girl full of energy, ambition, and love. She also happens to have an infectious laugh and a joie de vivre that captures who she really is. However, behind her wonderful personality is a little girl who’s had to endure countless operations, and worse still, the pain of being insulted simply for her appearance.

In a moving video, Lola’s Life With Apert Syndrome, the friendly interviewer, Chris, documents the effect Lola’s rare congenital disorder has had on her and her mom. It’s a moving report that is full of love and positivity, and a message that needs to be shared.

Read more:
Is it possible to raise children with both kindness and firmness?

Lola was born with Apert syndrome, which includes malformations of the skull, face, hands, and feet whereby abnormality in bone growth during fetal development drastically effects bone structure. While some surgery can be successful to help a child use their hands or relieve pressure on the skull, the physical differences are significant.

Despite the pain Lola has had to endure from her multiple surgeries, her mom shared that harder still has been the reaction to her daughter by others. People view her as her disorder, and don’t see the busy little girl behind the bright smile.

It’s obviously hard to see the pain felt by her mom, but Lola’s own explanation for how living with Apert’s has affected her is equally heartbreaking.

For a little girl made happy simply by flowers, it’s very hard to not be seen as “normal.” She repeatedly shares how she felt when one child asked why her hands are weird. She explains, as well as a 5-year-old can, “that’s not nice.” She says earnestly to the reporter: “How would you feel if somebody said why you weird.”

Thankfully Lola has been given confidence in God to face her physical differences. She states clearly and most correctly: “God made me this way. I’m beautiful and wonderfully made.”

It’s a fantastic message worth sharing, especially with your own kids, to help bring home the point that Lola is just as much a young girl as any other — full of love, laughter, and dreams. (She hopes to have a career in the police force so she can blow her whistle!)

Read more:
This unusual act of kindness will surely lift your spirits