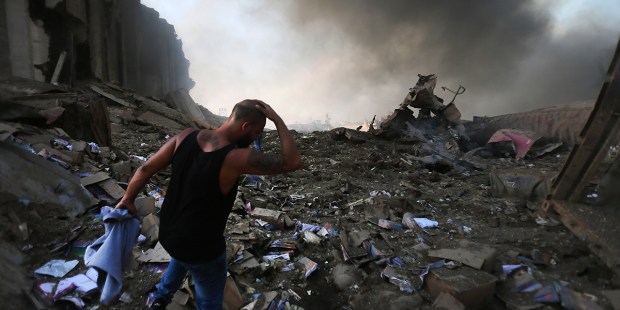 Aid to the Church in Need reports that at least 10 churches were destroyed, 300,000 people are homeless and many others are seeing their livelihoods “totally destroyed” by the blast.

An emergency food package of $300,000 is to be rushed out to Beirut by a leading Catholic charity in the wake of the huge explosion in the city on Aug.4.

The Aid to the Church in Need (ACN) grant will target poor families worst affected by the blast, which devastated the port area of the Lebanese capital.

At least 100 people were killed and 4,000 others were injured when 2,750 tons of ammonium nitrate stored in a warehouse exploded.

ACN Lebanon expert Father Samer Nassif said that the Christian zone of Beirut was “completely devastated,” with at least 10 churches destroyed, 300,000 people homeless and many others seeing their livelihoods “totally destroyed” by the blast.

He said: “Yesterday in one second, more damage to the Christian quarter of Beirut was done than throughout the long years of the civil war. We have to build it again from the ground up.”

Fathers Abdo and Nassif said that, after the long-running economic crisis and with the coronavirus pandemic, Lebanon is ill-equipped to deal with the emergency and urgently needs international help for the people’s basic needs. In “An Appeal to the Countries of the World” sent out Aug. 5, Maronite Patriarch Cardinal Bechara Boutros Rai, president of the Conference of Patriarchs and Catholic Bishops of Lebanon, said: “Beirut is a devastated city. It’s a war scene – there is destruction and desolation in all its streets, its districts and its houses.”

The cardinal called on all nations and the UN to help Lebanon, “because what happened goes beyond politics and goes beyond conflicts.”

Father Abdo described how at a convent not far from his monastery, a sick, elderly religious sister died from her injuries sustained in the blast. The Carmelite priest said she was the only one not in the convent dining room at the time of the blast and, had the others been in their rooms, many would have died or been seriously wounded.

“The explosion in Beirut is illustrative of the general situation in Lebanon and much of the Middle East. The country and region are plagued with conditions that easily turn deadly,” said ACN-USA Director of Outreach Edward Clancy.

“We will provide immediate help to those affected by this tragedy and in the long run we will continue our work to help the Church be a beacon of hope.”

Aid to the Church in Need is appealing for prayer for the victims and their families.

This article was first published by Aid to the Church in Need (ACN). To learn more about ACN’s mission to help persecuted Christians visit www.churchinneed.org