Explosions in Beirut: Caritas Lebanon helps the most vulnerable through “nightmare” 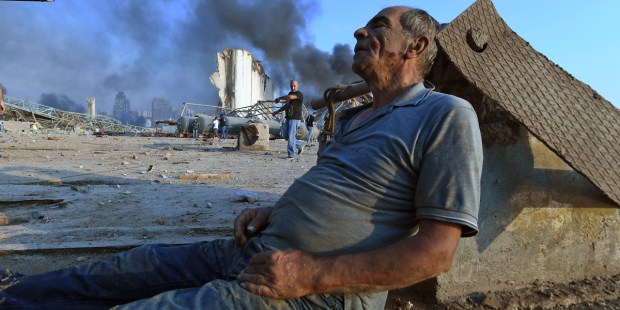 Caritas Internationalis expresses its solidarity and compassion to the Church of Lebanon, to the Lebanese people and to Caritas Lebanon, after the deadly blasts on August 4 that flattened parts of Beirut and killed at least 157 people and injured nearly 4,000.

“It is a terrible and disastrous situation and today we live in a total confusion,” told Caritas Internationalis Rita Rhayem, director of Caritas Lebanon, whose staff immediately took action to bring relief to those affected by the explosion. Caritas confederation is also launching an emergency plan coordinated by the general secretariat of Caritas Internationalis to immediately assist victims.

“The situation is critical and this is the first time that we have experienced a situation of such great magnitude, it is apocalyptic, but we don’t stop and we will carry on in order to help all those in difficulty” emphasizes Rita Rhayem. “There are a lot of dead and a lot of injured, and the health situation is likely to worsen quickly, as the toxic gases can cause additional health problems. Caritas Lebanon is preparing for this, but its health centers have no means to face this kind of situation, and rescue operations are made even more difficult by the lack of electricity.”

Caritas Lebanon’s headquarters was also badly damaged by the explosion. Providentially, the office had closed shortly before the explosion and therefore no staff were injured.

“Since 6 pm yesterday we have nothing to help the population,” says the president of Caritas Lebanon, father Michel Abboud. “Beirut is devastated and we are totally overwhelmed by the scale of the events.”

“The wounded are received in our primary care centres which are overwhelmed, the hospitals are incredibly crowded. They lack everything, including food to support the affected population,” added Rita Rhayem. The young volunteers are mobilized and they go in search of the wounded.

As Caritas Internationalis secretary general Aloysius John points out, the large-scale explosions inflicted a further injury to a Lebanon already on its knees due to the economic crisis, the violence, the Covid-19 pandemic and the consequences of the economic sanctions imposed to Syria. John says that “the international community must intervene urgently and unconditionally to help the population. There is a need to support the efforts of faith-based civil society organizations, in particular Caritas Lebanon, which is present throughout the country to meet basic and urgent needs, especially in this time of tribulation and trials for the Lebanese people”.

“We must not lose sight of the fact that the effects of economic sanctions and political violence have weakened this country and are weighing heavily on Lebanon, which is facing a food shortage. It is vital that the international community acts decisively to alleviate the suffering of poor Lebanese, immediately removing economic sanctions,” Aloysius John added.