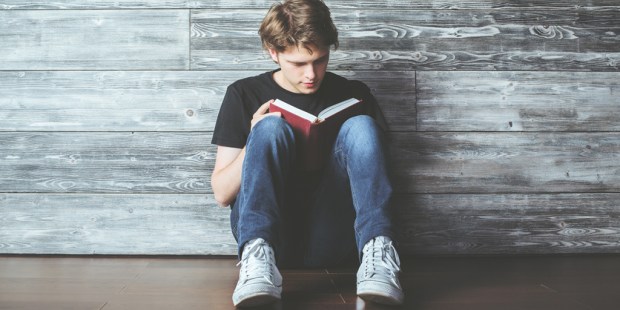 Godly people of history, including saints and biblical figures, seem to come to life on the pages of these wonderfully illustrated books.

Graphic novels are something of an unsung hero in the world of children’s literature today. Their vivid illustrations make them engaging and easy to read, but they include the complex plot development and boost in reading comprehension of more text-heavy books. They’re especially helpful for encouraging struggling readers.

Since they’re so much fun to read, graphic novels are a fantastic way to get your kids hooked on reading the Bible and lives of the saints. Your kids will probably love these selections about holy men and women, and they’ll learn a lot from them, too!

Pauline Media Saints Series: “We can find the lives of the saints recounted in books, but graphic novels are even better for a visual generation,” reads the Daughters of St. Paul blog. Pauline Media has published 9 graphic novels for kids, each featuring one of the following:

John Paul II: The Journey of a Saint: Magnificat offers this richly illustrated account of the life St. John Paul II, perfect for introducing young readers to this legendary hero of modern times.

The Tale of Patrick Peyton: Venerable Patrick Peyton isn’t well-known today, but at one time he was known as the “American Apostle of the Family Rosary,” who used television, radio and film to encourage devotion to the Blessed Mother and encourage families to pray together. Introduce your kids to this modern-day missionary who used mass media to spread the Gospel!

The Mission of Joan of Arc: Voyage Comics (created by Aleteia’s own Philip Kosloski) retells the fascinating story of St. Joan of Arc for modern young readers, with stunning visuals.

Finnian and the Seven Mountains: The extraordinary story of the Irish monks who saved civilization from Viking invasions over 1,000 years ago is re-imagined in this daring adventure novel. Kids can’t help falling in love with history through this action-packed tale of mystery, enchantment, and Irish lore.

Paul: Tarsus to Redemption: This version of the life of St. Paul is embellished with a few fictional details, but mostly stays true to the biblical story, which is certainly exciting enough in its own right. Introduce your kids to one of the most legendary evangelists of all time.

Saints Chronicles: Sophia Institute Press has a series of adventure-filled graphic novels about the lives of the saints, including the following:

Habemus papam!: The life of Pope Benedict XVI is retold with colorful illustrations for the younger set. This book is a great introduction to the process of choosing a new successor to St. Peter.

Pope Francis: I Believe in Mercy: Introduce kids to the story of Pope Francis’s life before he became pope, told in the popular manga style and with a special focus on times when he experienced God’s mercy.

Judith: Captive to Conqueror: The Biblical holy woman Judith is considered a prefiguration of Our Lady, and her story has all the drama, intrigue, high stakes, and excitement a person could ask for. Just a head’s up that her story does include some violence, and may be best suited to teens and up.

Action Bible: Yes, there’s a graphic novel of the Bible! The Action Bible is an appealing introduction to Scripture for kids. This version does not include the deuterocanonical books and tells the Scriptural stories in a very simplified way, so you may want to discuss parts of it with your child to make sure they have the full picture.

Read more:
How a children’s book helped me understand the mystery of free will and God’s providence