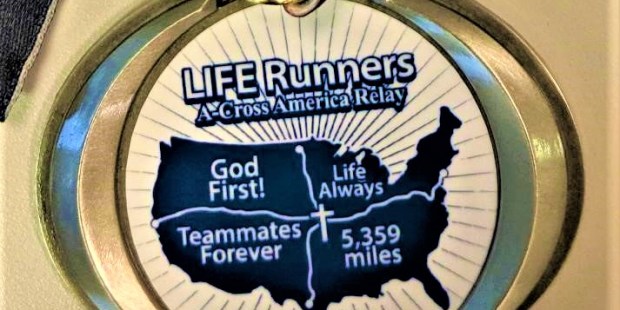 Twelve million steps taken all over the world lead to a celebration in Kansas.

The restoration of full legal rights for unborn persons won’t happen overnight, everyone in the pro-life movement seems to understand. The fight against abortion is a step-by-step process.

This weekend, some Americans are celebrating the fact that over the past 36 days, 12 million steps have been taken in that process.

On Saturday afternoon, some of the participants gathered for Mass in Lenexa, Kansas, celebrated by Archbishop Joseph F. Naumann of Kansas City in Kansas. This morning, a prayer rally is scheduled outside the Planned Parenthood facility in Leawood, Kansas.

Then, after 5,359 miles have been logged, some relayers will take the final steps at Roe Park in Overland Park, followed by a lunch, music and fellowship.

The name of the park has nothing to do with Roe v. Wade, the 1973 Supreme Court decision that legalized abortion throughout America. But Castle fancies that “God must be smiling on the coincidence that we celebrate life in a park called Roe.”

Castle, a former professor at the U.S. Air Force Academy, confesses that the relay is not all done on the route itself. Some participants in other parts of the country and the world adopt various segments of the course and pledge to run or walk that distance in their own locales. Altogether, there are 1,528 legs in the relay. Wherever pledgers run their 5K, they’re encouraged to do so wearing an official Life Runners shirt, which reads “Remember the Unborn, Jer. 1:5.” The scripture reference includes a quotation favored by pro-life advocates: “Before I formed you in the womb, I knew you.”

Runners are also encouraged to pray the Life Runners Creed and to offer prayers on an online “Prayer Wall” before they set out. The Creed includes lines such as “We believe in the dignity of all human life from conception to natural death. We run as a prayer to defend children in the womb. …”

Two members of Life Runners who wear that blue shirt are Julia and Alan Webb. Castle confided that about a year and a half ago, Julia Webb emailed him saying that she would “like to run for a higher purpose.”

“And by the way, my husband is Alan Webb, in case you’ve heard of him,” she added.

Alan Webb holds the American national record for the one mile, at 3 minutes and 46.91 seconds. He has competed in the Olympics and currently serves as assistant coach at the University of Arkansas Little Rock cross country and track and field teams.

Julia, an Olympic trials qualifier in marathon, is also a record-setter. Last November, she won the annual Route 66 Half-Marathon in Tulsa, Oklahoma, while pushing the youngest of their three daughters, Gabby, in a stroller. She came in first, with a time of 1:21:23, setting a world record for fastest time finishing a half marathon while pushing a baby in a stroller.

This July 7, she posted on Facebook that she “ran through north Austin today in the A-Cross America for Life Runners! 12 miles [3 miles of intervals] @ 85% humidity and upper 70s … So much joy despite the struggle.”

On July 26, she posted on Facebook that she ran again. This time, she challenged others: “If you have a body (running optional), have some courage and you care about ending abortion/killing of innocent babies in America you’re invited join my team.”

2020 was the second year the relay began on Independence Day. Previously, it was conducted during Lent, but the move was meant to give the cause greater visibility. In the spring, the weather in some parts of the country “can be very challenging,” Castle said. “Not that that was a problem for sacrificing, but it did cover up the message.”

The message on the t-shirt, that is. “When you have a winter coat, that message isn’t getting out,” he said.

As Julia Webb pushes her kids in a stroller while running, Castle said Life Runners is “pushing back against what I want to call the unjust peace of abortion.”

“There’s nothing peaceful about dismembering a little baby or ending the life of a child in his mother’s womb,” he said. “But the culture gives us this sense that abortion is normal, and we do the relay to say that there’s nothing normal about abortion.”

And, like marathoners, Castle and his team know they have a ways to go to convince America of that. As Life Runners pray in their Creed, “We run to build Endurance, for the race is long and we must keep our eyes fixed on you, Lord.”