Pope baptizes conjoined twins who were separated at Vatican hospital 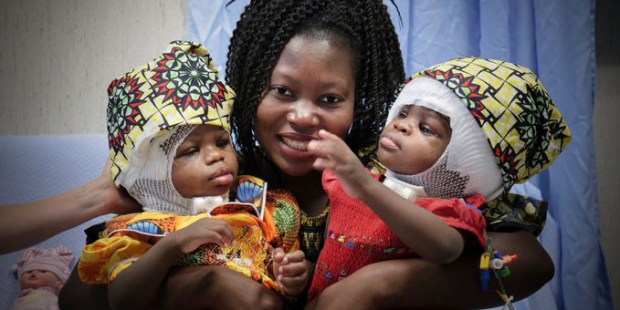 The amazing journey of the girls from the Central African Republic continues!

The amazing journey of little Ervina and Prefina continues: The twins were born conjoined and received the first-ever successful surgery of its kind in order to separate them. Now they have been received into the Church with the sacrament of baptism having been administered by Pope Francis.

At the time of their surgery, their mother reflected: “Ervina and Prefina were born twice. If we had stayed in Africa I don’t know what fate they would have had.”

Now the girls have been reborn through baptism.

The joyful news of their baptism was shared by Antoinette Montaigne, a Central African politician and former Minister of Communication of the country, who Tweeted the news (above). In the photo, taken in the Santa Marta chapel, we also see Doctor Carlos Marras, the head of neurosurgery at Bambino Gesù.

The little girls from the Central African Republic were separated at the Vatican’s Bambino Gesù Pediatric Hospital on June 5. The operation was a grueling process, complex because the girls shared a skull and a large number of blood vessels — the technical term being “total posterior craniopagus.”

This type of operation has never been successfully completed before.

The little girls were given the opportunity to undergo the surgery at the Vatican hospital after the hospital’s president, Mariella Enoc, made a visit to the Central African Republic in 2018.

It took a year of study and preparation to prepare for the surgeries; there were three in total, with the last one taking 18 hours and 30 doctors and nurses.

“When you come across lives that can be saved, you have to do it. We can’t just look away,” Enoc said at a press conference on July 7, announcing the successful surgery.

More pictures of the girls and the preparation for the procedure are available at the statement from Bambino Gesù (in Italian).