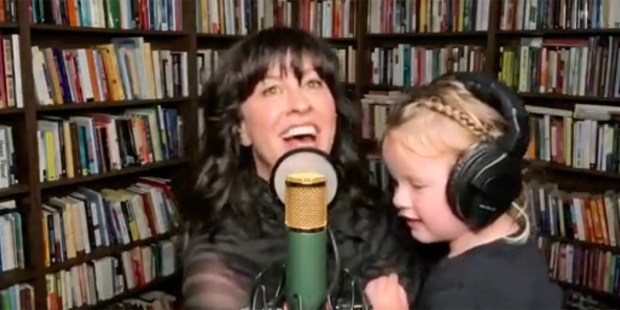 For the last few months, more than ever, parents across the globe have been juggling working from home with raising their families. Lots of moms and dads have had their little angels playing, bickering or singing in the background while navigating video conferencing, and trying to maintain a little professionalism.

It’s been tough, but it’s comforting to know that we’re all in this together, as a recent video of singer Alanis Morissette showed, when she took to the airwaves for the first time after an eight-year hiatus to perform her song “Ablaze” for The Tonight Show with Jimmy Fallon.

Read more:
How to work out when you’re a working mom

Throughout her video conference performance the songstress was adorably interrupted (or some may argue, accompanied) by her daughter, four-year-old Onyx, who was sitting on her lap. Despite the occasional comment, question, or mouth covering, the Canadian pro continued singing, and visibly enjoyed being able to perform with her daughter. This unexpected performance summed up every mom who finds a way to integrate motherhood into other aspects of life. Children are not mere appendages or side projects, but central to our lives and bring meaning and joy to so much that we do.

The video of the mom of three has gone viral since it was posted last week. It seems only right that her daughter gave a helping hand, considering the song is an ode to Morissette’s children. Who knows, perhaps when the Canadian singer does get to perform live in front of a crowd, her kids will make a little guest appearance!