Exclusive photos: In Kerala, India, a magnificent shrine to St. Thomas the Apostle

A giant granite cross stands at the entrance to the Palayur shrine, marking the spot where the "Apostle of India" erected a cross.

The southern Kerala state in peninsular south India boasts of seven “churches” said to be founded by St. Thomas the Apostle, who landed in the year 52 on the shores of the state (known as Malabar at the time). 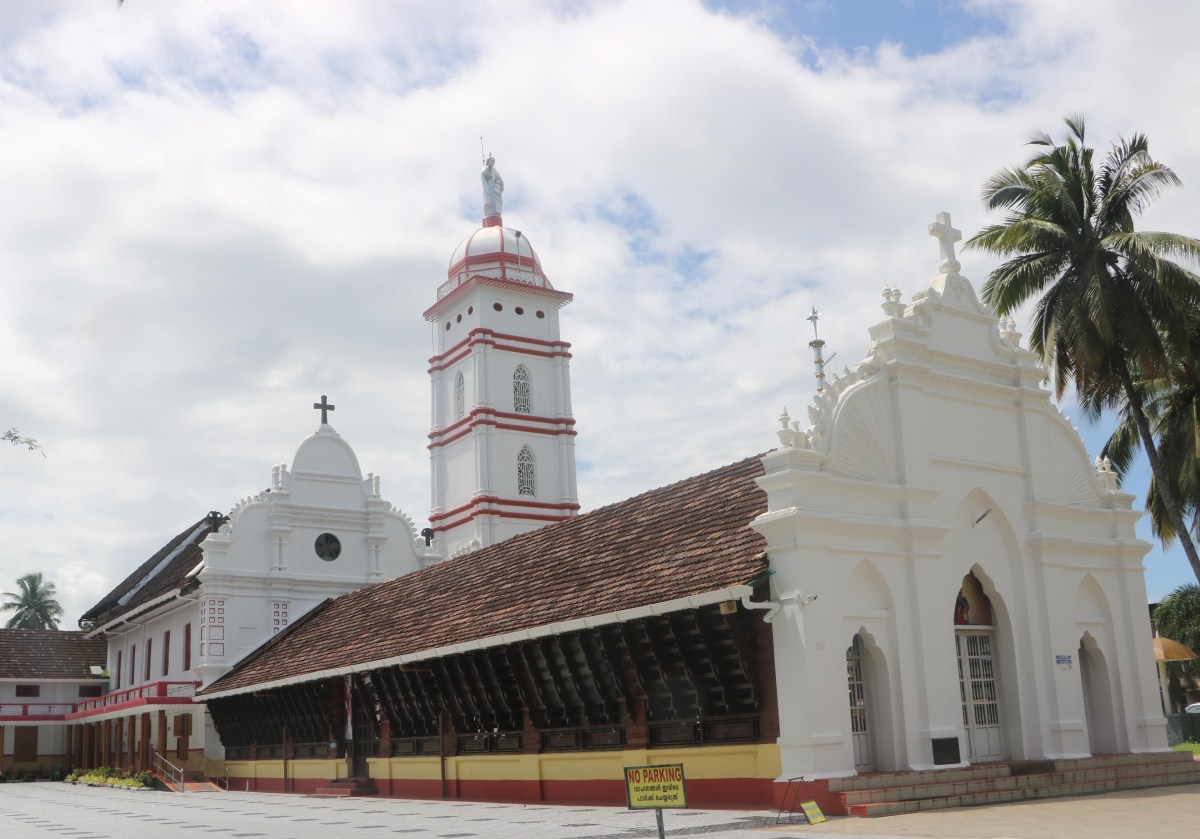 In fact, these seven “churches” are spots where the doubting Apostle founded Christian communities and planted crosses as he went around evangelizing in Kerala on his way to the neighboring Tamil Nadu state.

St. Thomas died a martyr in 72 at Mylapore Hill overlooking Chennai airport, and his tomb in Chennai city is known as Santhome Basilica, an international Catholic shrine.

Read more:
The little-known story of how St. Thomas the Apostle brought Christianity to India

Though proper churches had been built and rebuilt in these areas to commemorate the region’s ties to St. Thomas, the sprawling St. Thomas Shrine at Palayur – 20 miles from Thrissur – remains the only church that has been built exactly at the spot where the Apostle of India set up a cross.

A giant granite cross proclaiming this stands at the entrance to the Palayur shrine, which was rebuilt in 1607 by the Italian Jesuit architect Fenichio with the approval of the Hindu ruler. Several additions were subsequently made to the shrine, beginning with the erection of the 80-foot-tall bell tower in 1913. The St. Thomas statue on top overlooks the Muslim-majority Chavakad town along the Arabian Sea beach.

A history of St. Thomas’ arrival in India

Joseph Chittilappilly, a parishioner of Palayur, has put together a brief history of the shrine in his booklet titled Palayur Church. Himself a Jew, St. Thomas landed at Muziris (presently known as Kodungallur), which had a significant settlement of Jewish traders. From there, he traveled 30 miles north to Palayur — as that too had a Jewish community — following inland waterways to reach Palayur by boat.

“Palayur shrine is the foundation of our Archdiocese and the church in Kerala,” Archbishop Andrews Thazhath of Thrissur told Aleteia. (Kodungallur, where St. Thomas landed, was also a part of the Thrissur archdiocese until the Irinjalakuda diocese was established  in 1978.)

The boat jetty pond in front of the church where the Apostle Thomas is said to have landed has been made into a tourist attraction even for non-Christians, with a 45-foot-high towering statue of St. Thomas along with a concrete boat sculpture that recalls the arrival of the Apostle. It was during this period that the church erected compound walls around the adjacent baptismal pond.

Chittilappilly has narrated in detail how the “baptismal pond” was said to have become the center-point of evangelization for the Apostle. It was at this pond that tradition tells us that St. Thomas interacted with the locals bathing and throwing water in the air after prayer. When he queried them about this ritual, they told him it was an “act of prayer to please the gods.”

“The gods are not receiving the water you are throwing upwards. That is why it is falling down… .. If I throw water upward after prayers, my God will accept it,” St. Thomas is said to have told them.

As the story goes, they challenged the Apostle to demonstrate it and promised to accept the Christian faith if he could do that.

St. Thomas stepped into the pond, prayed and threw the water up in the air.

“To the surprise of those present, the drops of water remained in the air for a long time shining like stars without falling down, and later disappeared. Most of those witnessed this miracle embraced the Christian faith and were baptized by the Apostle,” Chittilappilly recounted. This scene has been depicted even in secular movies about  St. Thomas.

A popular spot for baptisms

Statues recalling this baptism have been erected on the steps of the “baptismal pond,” which has become a big attraction for Catholic families visiting the shrine in recent years.

Up to two dozen infants from across the archdiocese are brought in for the special baptism at the same spot on the Sunday after the 10th of each month.

“Many families bring their infants enthusiastically here for baptism at the spot where St. Thomas baptized the first Christians in India nearly 2,000 years ago,” pointed out Archpriest Varghese Karippery.

With the Thomas shrine being elevated  to a “Major Archepiscopal shrine” of the Syro-Malabar Church in Kerala this July 3, on the feast of St. Thomas, the title of the vicar of the Shrine has been officially changed to “Archpriest.”

While the families and dozens of kin gather around the chapel leading to the pond for the baptism, the newly baptized infants are led in procession under colorful umbrellas to the shrine, leading to a festive atmosphere in the shrine every month.

All the 160 bishops of India attending the assembly of the Catholic Bishops Conference India (CBCI) visited the shrine in January 2004. Among those who posed for photos at  the baptismal pond was the late Archbishop John P. Foley, Vatican delegate to the CBCI assembly.

This historic visit of all the bishops of India to the Shrine was also marked by the inauguration of an archaeological museum by Cardinal Ignas Mousa I Dawood, Chair of the Vatican Congregation for Oriental Churches.

Hundreds of historical statues of St. Thomas, crosses from across Kerala, and other artifacts related to the history of St. Thomas and the culture of Syrian Christians are being collected and displayed at the museum.

The shrine draws hundreds of pilgrims on Friday nights during Lent, when several parishes across the archdiocese undertake night-long Stations of the Cross processions to the shrine, concluding with a special Mass at 4 a.m. for the pilgrims.

Since 1998, the Archdiocese of Thrissur has been organizing a pilgrimage to the shrine starting from the Lourdes cathedral in the heart of Thrissur and from other deaneries on the Sunday preceding Palm Sunday. Over 100,000 Catholics take part in the day-long 30-mile pilgrimage that ends with a solemn Mass.

With the popularity of the shrine as a storehouse of the Kerala church’s St. Thomas legacy steadily on the rise, busloads of pilgrims from other dioceses and churches visit the shrine. The  arrival of pilgrims shoots up during the holiday seasons, while dozens of tourists drop in regularly at the historical shrine.

Three dozen Catholics from the United States visited the shrine this January, led by bishop Joy Alapatt, Auxiliary of Chicago diocese of the Syro-Malabar Church, which takes pride in its ties to St. Thomas.

For more information about visiting the shrine email stthomasshrine@gmail.com. The shrine’s website is currently under reconstruction.