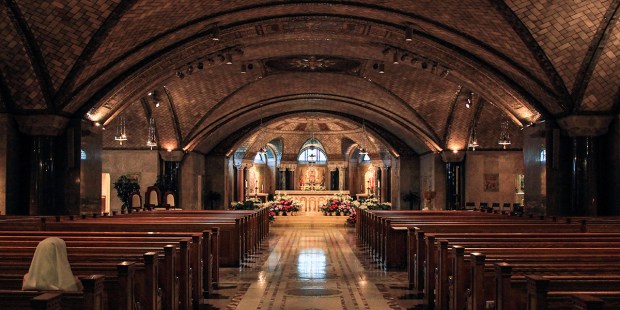 During a heat wave, such as the one parts of the country is experiencing, one of the best places to go cool off is an old church. Especially if the walls are made of stone, a church helps maintain lower temperatures and keeps the heat on the other side of the stained-glass windows.

If it’s a crypt church, under the ground level, it might be even cooler.

The crypt church of the Basilica of the National Shrine of the Immaculate Conception is cool in more ways than one. Sure, taking a breather from the hot streets of Washington, D.C., is a benefit. But while you’re visiting the shrine, there’s a lot to feast your eyes on and contemplate.

The lower level church of the national shrine has some of the most interesting art and architectural features in the nation’s capital. It brings together significant art forms from Europe and North America in a way that enhances prayer and meditation.

The European contribution to this space is primarily the ceiling tiles, designed by Spanish architect Rafael Guastavino Moreno. His special technique of interlocking tiles laid out in a herringbone design also graces famous buildings around the country, such as New York’s Grand Central Terminal and Boston’s Public Library.

Artistically melded with this overhanging structure are Mary Chase Stratton’s pewabic ceramic tiles. The word “pewabic” has nothing to do with the pews in which visitors can sit, but refers to Stratton’s invention of tile glazing, named after a Native American (Chippewa) word for iron.

“The secret of her Pewabic technique was never revealed and remains a mystery to this day,” says the shrine’s website. “The combination of Pewabic ceramics and Guastavino vaulting came about with the decision to use St. Genevieve marble wainscoting on the walls of the Crypt Church. Charles D. Maginnis and Fr. Bernard A. McKenna, personal secretary to Bishop [Thomas J.] Shahan, at the suggestion of Mary Chase Stratton, decided to ‘tie the gray and goldish streaks of that marble’ to the Guastavino ceiling by intersecting the arches with Pewabic ceramics.”

Read more: Architectural gems in the U.S. were built by this Spanish immigrant

Stratton’s iridescent glazes grace the church particularly in the rondels of the ceiling of each apse, the shrine explains: “The west apse features scriptural figures who were part of prophecies: Deborah, Miriam, and Ruth. The north apse focuses on the theme of promise, showing depictions of Elizabeth, Mary, and Anne. The east apse reflects the gift of fulfillment, portraying Peter, Salve Regina, and Paul.” The website continues:

The designs on each of the small square ceramic border tiles, the ceiling panels and rondels, and the capstones duplicate distinctive symbols and images found in the Roman catacombs. Particularly noteworthy are those of the Eucharist in the north apse. Each dome spans 65 feet across diagonally! At the intersection of each arch is a ceramic embellishment by Stratton: the ceramic ornament above the main altar, God the Holy Spirit; that above the nave, God the Father; and the panel between the main altar and the nave, Verbum caro factum est (The Word became flesh) or God the Son. The three installations are adaptations from La Disputa (1509-10) by Raphael, a fresco in the Apostolic Palace of the Vatican.

The Crypt Church and the fourteen Stations of the Cross were Stratton’s largest commission, taking almost seven years to complete.

This year is the 100th anniversary of the blessing of the site of the future Basilica of the National Shrine of the Immaculate Conception.