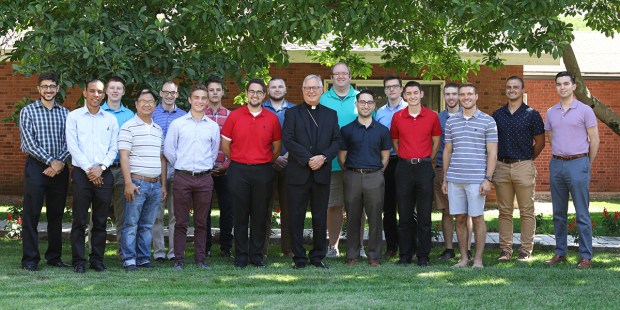 Bishop Thomas Tobin of Providence, Rhode Island, took to Twitter recently to announce the enrollment of eight young men in Our Lady of Providence Seminary. The prelate noted that this is the largest incoming class of future priests in the Diocese of Providence in nearly 40 years, and he asked the Catholic community to pray for their development. He wrote on his Twitter account:

… our seminarians are exceptional young men with diverse backgrounds and experiences — very strong candidates for the priesthood. Fully aware of the challenges they face, they want to help the Church and bring the perennial Good News of Jesus Christ to our troubled world!

Catholic News Agency spoke with Father Brian Morris, vocations director for Our Lady of Providence Seminary, who called the new seminarians an answer to the prayers of the diocese. He noted that the clergy shortage, in both Providence and the United States as a whole, has been the focus of the seminary’s weekly Adoration. He told CNA:

“It’s the result of a lot of prayer. People throughout our diocese have been praying diligently for more vocations, more young men who consider the call to the priesthood,” he said. “Why God chose this year? I don’t know, that’s up to him, but I think some of it is to deal us some good news. [We are] in a time right now [of] negativity and so much going on. This is wonderful news for our diocese, and I think God is showing us a little light in the dark.”

Father Chris Murphy, the rector of the seminary, cited the increased vocational efforts of the diocese for the success in drawing new seminarians. He remarked that events and retreats have helped to form bonds between local priests and those who are discerning their vocation, but he said there is a more important factor at work:

“I would say even more important than [events] is the example of the witness of the priests in these men’s lives — their pastors, their chaplains, their theology teachers at the high schools for the Catholic high school students.”

Learn more about the largest class of seminarians in Providence in nearly 40 years at Catholic News Agency.