If a Parish Visitor knocks on your door, expect an encounter with Jesus 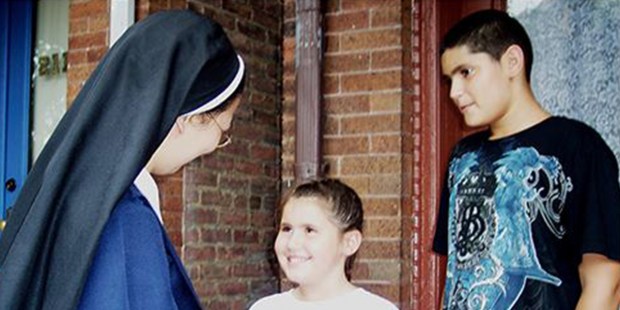 Community founded to reach out to fallen-away Catholics celebrates 100 years.

Two years after a flu pandemic killed millions of people around the world, a religious sister left her community in South Bend, Indiana, and came to New York to begin a new initiative. What would evolve into the Parish Visitors of Mary Immaculate began reaching out to Catholics who had fallen away from the practice of the faith as well as to non-Catholics who were open to the faith.

Members of the community — some 60 strong — anxiously await the time when they can return to the practices Mother Mary Teresa established, including one-on-one, door-to-door evangelization.

“Our founder said that our apostolate is personal — face to face and heart to heart,” said Mother Maria Catherine Iannotti, P.V.M.I., general superior.

“In imitation of the Sacred Heart of the Good Shepherd, Parish Visitors of Mary Immaculate combine a contemplative prayer life with missionary visitation to parish families, and religious instruction,” says the community on its website. The work they do is an “overflow” of the love of God that is fostered in prayer, which includes daily Mass and an individual daily holy hour. “Parish Visitor Sisters visit families and individuals where they live, door to door as well as along the way, in order to win souls for Christ.” The sisters set about to seek “those Catholics most spiritually deprived and distant from the Church.”

Very often, a sister will knock on a door and ask, “Is there anyone here who has been baptized a Catholic?”

The sisters do their work at the invitation of the pastor. Their relationship with a parish could be long- or short-term and could involve home visits, visits to shut-ins, visits with families of children who have made their first Communion, or teaching the faith as a catechist or director of religious education. In some cases, they also work in local dioceses. Two sisters are currently directors of evangelization in the Diocese of Phoenix , Arizona, for example.

“Religious instruction, informally in homes or in small groups or formal parish classes, helps adults, children, and teens respond to the love of God with their whole heart, so the gift of faith may become more living, conscious and active in them,” the website explains. “We have a special love for those who are spiritually neglected, especially the children.”

“As Pope Francis says, ‘Go out to the periphery,’ said Mother Maria Catherine. “We’ve been doing that. It’s really our mission to find those persons who are away from the Church, to bring them back.”

Since their founding in New York, the community has expanded to other parts of the country and to Nigeria and the Philippines. They also train lay people to engage in door-to-door ministry.

The COVID-19 pandemic has presented a special challenge for the sisters, who cannot meet with people personally as much as they would like. “We’re discerning right now when we’ll know when it’s safe to return to door to door ministry. We have to use prudence and good judgment and rely on the Holy Spirit,” Mother Maria Catherine said.

Technology such as Zoom has helped in the meantime, but it’s far from desirable for sisters whose founder insisted so much on face-to-face encounters. Even before the pandemic, the Parish Visitors’ door-to-door model was proving to be valuable at a time when new technology transformed the way people relate to one another. While the internet promised to “connect” everyone, the number of people reporting loneliness, isolation and depression has increased significantly.

Even in the 1920s, the founder of the Parish Visitors warned her sisters not to rely on new technology. “Mother always said ‘Never stop stair climbing,” said Mother Maria Catherine, who is vice postulator of the cause for canonization of the founder. “‘Don’t let the telephone be your way of meeting people. Go to their homes.’ … That’s why, during this pandemic, we’re meeting people through all these technologies, but it’s not our way. We’re doing it now because of circumstances.”

Coincidentally, the founding of the Parish Visitors was also the year of the birth of Karol Wojtyla, who would go on to become Pope John Paul II. Mother Maria Catherine, in an interview, discussed the parallels between his vision of the New Evangelization and Mother Mary Teresa Tallon’s vision.

“The first thing is that he had this strong sense of the dignity of the human person and how in Christ we see ourselves,” she said. “Mother herself had this great sense of the dignity of the soul and the dignity of every person. In his document Novo Millennio Ineunte, he talks about holiness being number one, the most important of our priorities. When you read Mother’s writings, you see that that was her priority as well. She really wanted to draw everybody to holiness of life, to know God, to love him and to serve him. She would talk to anybody about being holy — even her doctors. I have letters she would write to her doctors, where she says things like ‘I’m praying for you to be a saint. That’s the most important thing in your life.’ Whether it was her students in school, her doctor, the delivery boy who came to the door, for her it was always holiness.

“She always said to her sisters, ‘We will not be fruitful in God unless we become saints,’” Mother Maria Catherine continued. “Also, the Holy Father [John Paul II] had a great love for the Eucharist and Our Lady. In order to evangelize, we need Our Lady, the Star of Evangelization, and we need Eucharistic spirituality, and that was very much part of Mother’s own spirituality.”

Mother Maria Catherine said the founder loved receiving Holy Communion, and in her day, it was uncommon for Catholics to receive Communion on a daily basis — or even every Sunday. When reforms initiated by Pope Pius X led to a lowering of the age for first Communion and more widespread frequent reception of Communion, “she was deeply ecstatic, because that was part of her prayer for many years.”

At a time when many Catholics are not able to go to church in a “normal” way, when there is concern that even receiving Communion could be a vector for transmission of the coronavirus, there is another parallel to the early years of the Parish Visitors. And as the Parish Visitors enter their second century, they pray that they will soon be able to start knocking on doors again.