5 Cultural traditions to celebrate the feast of the Assumption 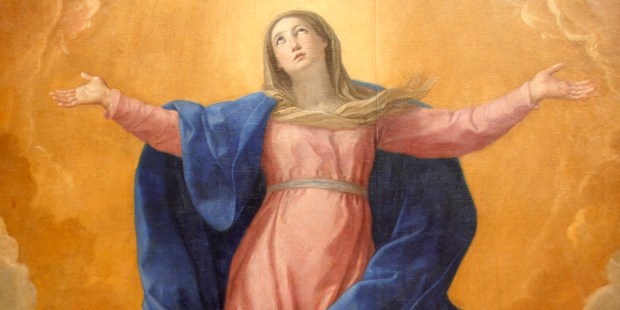 Here’s how to easily incorporate fun historical customs into celebrating this holy day at home.

Although the dogma of Our Lady’s Assumption was not officially defined until 1950, the faithful had known and believed that Mary was assumed into Heaven since the earliest days of the Church. In fact, August 15 is one of the oldest Marian feast days!

Over the centuries, many popular devotions sprang up to honor the Blessed Virgin on this holy day. In some countries, women named Mary honored their patron with open-house parties for their friends and neighbors; towns held processions and festivals with flowers, music, and dancing.

The Feast of the Assumption traditionally has been a Holy Day of Obligation in many places; even with the current dispensation, this feast day is a good time to attend Mass if you are able to, watch Mass online, or pray the Liturgy of the Word at home with your family. You might also pray the Glorious Mysteries of the Rosary, reflecting in a special way on the fifth mystery, “The Crowning of Mary, Queen of Heaven and Earth.”

Here are 5 other historical ways to honor this feast day, along with ways to incorporate the traditions into your home.

1
Our Lady of the Herbs and Flowers

It’s believed that herbs picked in August are the most potent, so many churches traditionally held a “blessing of the herbs” on this day. In Poland the day was known historically as the Feast of Our Lady of Herbs, and Poles in America often continued the tradition in a new way, as Our Lady of Flowers. In traditional celebrations, children would sing hymns in Polish and English at church, and later their parents enjoyed dancing to traditional Polish music.

Your family might offer herbs and flowers to an image of Our Lady while singing hymns in your home, followed by lively dancing!

2
Procession through the town

In Italy, the townspeople follow a statue of Our Lady in a procession through the streets to the church. Siena is known for its “Palio di Siena,” a wild, lawless, exhilarating horse race in the city’s public square. The participants and many attendees wear medieval costumes, and the city turns out with decorations and spectators, making the annual race a beloved tradition.

Young children might love the idea of an enthusiastic hobby-horse race around the backyard or living room, or you can keep it simple with a sedate(-ish) procession accompanied by singing hymns.

In Portugal the annual festival on this feast day is called the Romeria. A brass band and traditional drums and bagpipes (the Galician gaita) play while statues of Mary, Queen of the Angels, are crowned in the churches.

Crowning Mary with flowers is a tradition commonly done in May, but there’s no reason not to honor Our Lady any day of the year, and the Assumption is an especially appropriate day! So if you never got around to doing a May crowning, the Church has your back: Here’s another liturgically appropriate occasion to crown Mary. You could make a flower crown for a Marian statue, or check out these genius Mary Statue printables with tiny flower crowns.

In Armenia there is a custom of offering the “first fruits” of the harvest to God, in imitation of the Biblical Abel, who made the same worthy sacrifice. So the Sunday nearest to the Feast of the Assumption is set aside for the Blessing of the Grapes. A commendable custom arose of abstaining from eating grapes until after the blessing, at which time trays laden with fruit were brought into the churches, blessed, and given to each member of the congregation to take home. In some places, feasts were held in vineyards.

Eating grapes on the Feast of the Assumption is an easy and delicious way to celebrate! In keeping with the spirit of the day, you might offer a special prayer of thanksgiving for God’s good bounty.

In some parts of France, there is a custom of proposing marriage on August 15, when the couple can ask Mary to specially bless their future together. Young people traditionally enjoyed picnics and parties, and after a procession following a statue of Our Lady through the village, they would dance by the light of bonfires. If you’re thinking about getting engaged, the Feast of the Assumption would be a perfect day to propose, don’t you think?

Read more:
The history and the heart of the Solemnity of the Assumption