Saints who studied (or taught) from home 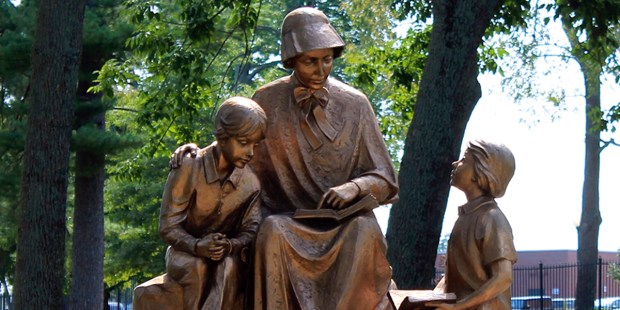 Education has changed a lot through the centuries, but some saints are known for the lessons they gave or received at home.

With many parents choosing to homeschool their children for the first time this year (and plenty more continuing after years of educating their children at home), homeschooling families around the world would do well to look to the saints who’ve gone before.

Though none of them had to deal with online learning or an abundance of curricula to choose from, all of these homeschooling and homeschooled saints are models of how to grow in holiness while learning (and teaching) at home.

St. Emilia of Caesarea (d. 375) is known as the Mother of Saints. Among her 10 children are three bishops (one a Doctor of the Church) and a total of six saints. And while her sons eventually left home and went off to school, Emilia and her mother-in-law St. Macrina the Elder taught them all at home in their youth, with Emilia’s oldest daughter (St. Macrina the Younger) helping out with the little ones. This was the intellectual foundation of Sts. Basil the Great and Gregory of Nyssa. As in many large homeschooling families, the siblings learned nearly as much from each other as they did from their parents, and both Basil and Gregory considered their older sister Macrina enormously influential on their intellectual and spiritual formation.

Read more:
Meet the family and their friends that gave the Church at least a dozen saints

St. Elizabeth Ann Seton (1774-1821) changed the face of American education forever when she founded the first free Catholic school in America. But before she was a pioneer in the field of education, she was a homeschooling mother of five. After her husband’s death, the young convert to Catholicism continued to educate her own children with such success that other children began to attend her classes. Though anti-Catholicism forced her from her home in New York City, Elizabeth Ann found a patron in the Archbishop of Baltimore, who supported her as she founded a brick-and-mortar school in Maryland, run by her new order, the Daughters of Charity.

St. Francis Choe Kyong-hwan (1805-1839) realized as a young man that religious practice had declined among Korean Catholics who had been living for decades without a priest. To fight this, Francis and his wife (Blessed Maria Yi Seong-rye) founded a small Catholic village. In addition to working the fields, Francis educated his own children and all the villagers, gathering them in his home each night to instruct them in the faith. As the persecution of Christians worsened, Francis encouraged his people to bury all their sacramentals and sacred images so that they wouldn’t be defiled by soldiers; the books, however, they must not hide. “A soldier going to war needs his battle instructions,” he said. “At a time like this we must study all the books more earnestly.” When soldiers came to arrest the Christians, Francis offered them food and a good night’s rest. The next morning, dozens of Christians peacefully followed the soldiers to prison; several were then martyred, including Francis and Maria. Their oldest son, Servant of God Thomas Choe Yang-up, later became the second native Korean priest.

St. Joaquina Vedruna de Mas (1783-1854) had been homeschooled herself as a child. Though it was the custom of well-to-do Spanish families to bring in governesses, Joaquina’s mother chose to educate her children herself. After Joaquina married, she did the same, homeschooling all nine of her children even after her chronically ill husband left her a widow at only 33. When her children were mostly grown, she founded an order of Carmelites dedicated to the same work she had spent her life doing: teaching and nursing.

Read more:
This mom of a large family founded a branch of Carmelites before dying in a pandemic

Sts. Louis and Zélie Martin (1823-1894, 1831-1877) sent their daughters to boarding school when the girls were about eight, but up to that point lessons were taught in the home. Zélie instructed her children in history and religion as well as teaching them to read; Louis conducted the examinations, in which his daughters sought to please their father. And when young Léonie was repeatedly expelled from the school her sisters attended, she came home again to be educated by her mother, though Zélie was also busy with the lace-making business that supported the family. It was during this time (when the Martins chose to homeschool their third daughter rather than sending her to another school) that Léonie and Zélie found healing in their relationship and Léonie began to master her obstinate and emotionally unstable nature; many years later, Léonie would be declared a Servant of God, like her sister St. Thérèse before her.

Read more:
Children have a right to a Christian education, says pope