What does the Assumption of Mary mean? 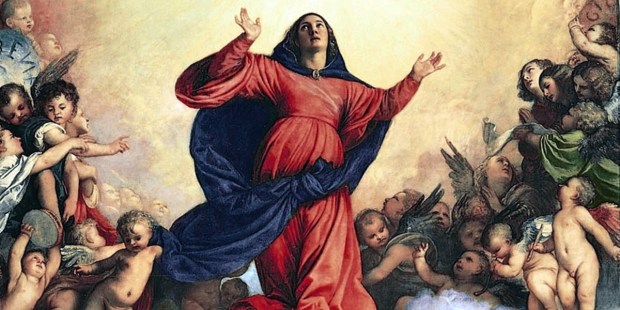 The Assumption is the feast that celebrates Mary’s being taken body and soul into Heaven at the end of her earthly life.

Among the various celebrations in the Catholic Church, one that can be confusing to some is the Assumption of Mary, celebrated on August 15.

What does the Assumption of Mary mean?

According to the Catechism of the Catholic Church, the Assumption refers to an event that occurred at the end of the Virgin Mary’s life.

“Finally the Immaculate Virgin, preserved free from all stain of original sin, when the course of her earthly life was finished, was taken up body and soul into heavenly glory, and exalted by the Lord as Queen over all things, so that she might be the more fully conformed to her Son, the Lord of lords and conqueror of sin and death.” The Assumption of the Blessed Virgin is a singular participation in her Son’s Resurrection and an anticipation of the resurrection of other Christians. (CCC 966)

This is a belief in the Catholic Church that has its origin in the first few centuries of Christianity, finding its source in early stories of the Virgin Mary’s “death.”

St. John Damascene, an 8th century Christian author, wrote about how fitting it was for the Virgin Mary to be assumed into Heaven.

Pius XII details in his apostolic constitution, Munificentissimus Deus how this belief has been handed down over the ages and finds evidence even in scripture.

Moreover, the scholastic Doctors have recognized the Assumption of the Virgin Mother of God as something signified, not only in various figures of the Old Testament, but also in that woman clothed with the sun whom John the Apostle contemplated on the Island of Patmos. Similarly they have given special attention to these words of the New Testament: “Hail, full of grace, the Lord is with you, blessed are you among women,” since they saw, in the mystery of the Assumption, the fulfillment of that most perfect grace granted to the Blessed Virgin and the special blessing that countered the curse of Eve.

The Assumption is an ancient celebration, one that honors the Virgin Mary and her role in salvation history and the eternal destination prepared for her by her Son, Jesus.

Read more:
5 Cultural traditions to celebrate the feast of the Assumption

Read more:
The history and the heart of the Solemnity of the Assumption