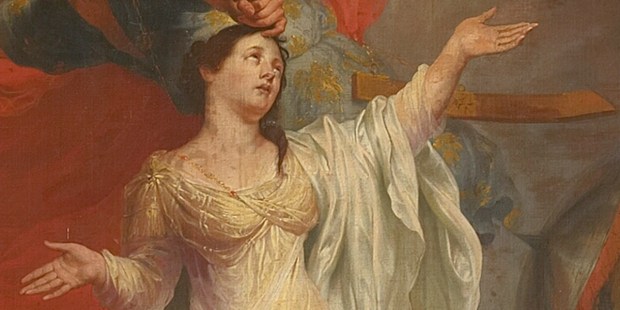 The “family foster care” model inspired by the martyred Irish princess is now seen as the gold standard in psychiatric care.

In the often outlandish annals recording the lives of the saints, St. Dymphna’s story is an especially sad one. According to legend, she was an Irish princess and Christian whose mother died when she was a teenager. Her father went mad with grief and decided the solution was to marry his daughter. Horrified, Dymphna fled in secret with her .confessor and two other friends. She evaded capture for a while, but her father finally caught up with her around 620 in Geel, Belgium, where he cut off her head when she continued to refuse him.

Since her canonization, St. Dymphna has been considered an intercessor with special concern for people suffering from mental illness. But most people don’t know that she left a lasting and extraordinary heritage in the town of Geel itself—a legacy that has stretched across 1400 years and continues to this day.

Geel has a “family foster care” program in which mentally ill people come to live with families in the town and are accepted and fully integrated into the community. The program is the oldest therapeutic community in Europe, with records dating back to the 13th century, and is believed to go back to the 600s. And today, mental health professionals around the world are looking to Geel as the “gold standard” for psychiatric care.

The program began when pilgrims would bring mentally ill family members to Geel to pray at St. Dymphna’s shrine for a “cure.” The residents of Geel became accustomed to having people with mental illness visiting and staying in their community, especially as the families of Geel often hosted pilgrims in their homes. Some of these people with mental illness stayed in Geel permanently after their pilgrimage was over, becoming long-term “boarders,” and so the custom of “family foster care” began.

Read more:
Depressed? Here’s a patron saint for you

The program is not a short-term one; the majority of the “boarders” are in the program for decades. In many cases, the children and grandchildren of the original foster parents continue to offer the patient a home. Henck P. J. G. van Bilsen, a clinical psychologist in New Zealand, studied the program and its history, and describes how it arose as an initiative of the people:

The high point of the Geel project came just before the Second World War, when almost 4000 patients were looked after in the family foster care system. Most patients were Belgian, but many were Dutch, French, and even English. There were also several Spaniards and Russians. Patients represented the complete range of mental health problems. The cost of family foster care was paid for by the patient’s relatives or by the community from which the patient came.

There was some kind of selection with respect to families that could look after these patients. To be qualified (or ‘certified’ in Geel-ian terms) required that the family had a good record, meaning that no family member had ever been in legal or moral trouble (behaving in a manner that went against the moral code of the time). Certification was a matter of pride and social standing; not to be certified meant that something was not right with the family. The desire to do this work was instilled long ago, and it became a raison d’être, a tradition handed down for generations. Certain families were known for the adept guidance of certain types of patients, a point of considerable importance and source of personal pride.

The program is so extraordinary not only because it involves the entire community but also because it allows people with obvious, visible signs of mental illness to be full participants in the life of a family and a welcoming community. This integrated program is a stark contrast to how mentally ill people were treated in many other places throughout history. They might have been believed to be possessed, subjected to dehumanizing “cures,” and even banned from the community. In more recent centuries, they would have been locked up in “insane asylums” that were often very unhealthy environments.

In fact, in the 19th century, the Geel program was criticized for not adhering to what was then considered the most advanced, scientific care: insane asylums. NPR reports that the program became a source of contention among 1800s psychiatrists: “Some people regarded Geel as a sad remnant of old medieval culture where people were left to toil in the field and never given therapy and no chance of recovery.”

How times have changed! Now the Geel program is considered an example of best practice, and researchers study it to understand and hopefully replicate its success. The World Health Organization’s 2001 report on mental health states, “One of the best examples of how communities can become carers of the mentally ill is to be found in the Belgian town of Geel, the site of what is undoubtedly the oldest community mental health program in the western world.”

Although the program has declined in recent years, with only about 250 boarders today, it’s still going strong and remains an exemplar. It’s hard to imagine that it would ever end entirely: It offers people with mental illness ongoing social integration, care from the community, and a normalized lifestyle that may not be available in their places of origin.

Caring acceptance of each “boarder,” in turn, heals the whole community. The kindness, generosity, and patience that these families live out surely makes them better people. But they have also gained what amounts to a new family member to love, along with a helpful network of families and mental health professionals to support them.

It would be interesting to see whether and how this model could be replicated. The families are not trained psychiatrists, but they practice a “radical compassion” that calls to mind the love of Christ and the vocation of all Christians. Through this love, they help their “boarders” flourish in happy, stable lives. As van Bilsen wonderfully explains,