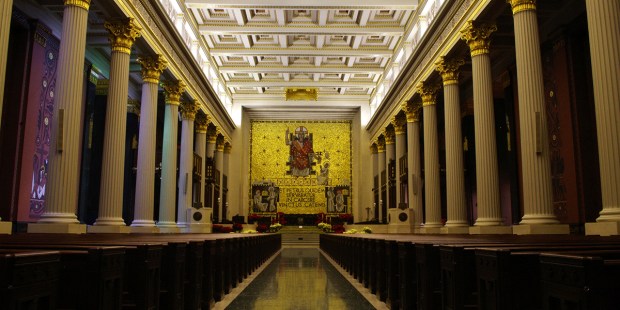 There are now nearly 90 minor basilicas in the United States.

Aleteia’s own Philip Kosloski explains that in order for a cathedral to be raised to the status of basilica it must be, “proven to have extraordinary beauty with a rich history behind it to be given the title.” He explains:

Being named a basilica by the pope brings certain “privileges” to the church, such as “conferring a certain precedence before other churches (not, however, before the cathedral of any locality) … the right of the conopaeum [and] the bell. The conopaeum is a sort of umbrella (also called papilio, sinicchio, etc.), which together with the bell” was used in processions for official occasions.

According to Catholic News Agency, the application for the change was submitted to the Congregation for Divine Worship and the Discipline of the Sacraments in 2018. They noted that St. Peter in Chains was shown to fit the criteria for becoming a basilica, which include: an active pastoral liturgy, fame within the diocese, and historical as well as artistic value to the Church.

Fox19 reported that Cincinnati Archbishop Dennis Schnurr announced the elevated status over the weekend during Mass:

“For all of us who live and worship in our archdiocese, this is a great blessing and honor that has been bestowed on our cathedral church,” said Archbishop Schnurr. “Let us pray on this day, as we honor Our Lady in her Assumption, that the Church of the Archdiocese of Cincinnati, her clergy and faithful, along with all the people of this great city, may benefit from this blessing and give thanks for all that the Lord has brought to fruition.”

He went on to note that the cathedral’s architectural beauty and historical presence in the Cincinnati community were important factors that contributed to the decision.

St. Peter in Chains plans to host a Mass of Thanksgiving on November 7. The celebration will coincide with the 175th anniversary of the cathedral’s dedication.