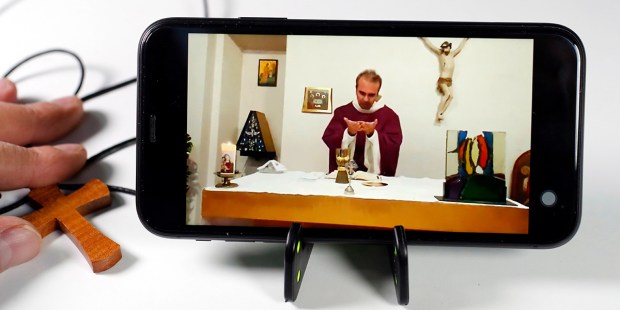 Americans are largely satisfied with the virtual worship experiences they have been having since the coronavirus forced houses of worship to close, but very few will continue using the internet to attend services once the health crisis passes.

That is the finding of the Pew Research Center, which also said that a third of U.S. adults have watched religious services online or on television in the past month.

“Whatever the reasons, lots of people like virtual worship,” said Pew, announcing the results of a survey conducted in mid-July. “Nine out of 10 Americans who have watched services online or on TV in the past month say they are either ‘very’ satisfied (54%) or ‘somewhat’ satisfied (37%) with the experience; just 8% say they are ‘not too’ or ‘not at all’  satisfied.”

Like other houses of worship, Catholic churches continue to grapple with meeting the spiritual needs of parishioners at a time when social distancing and masks are expected or required in public. While many are happy to be able to return to church after public Masses were suspended for some time, some are wary and continue to stay home, viewing Mass online or keeping the Lord’s Day in some other way, such as private or family prayer or Scripture reading.

At least one diocese, though, has reversed its suspension of the rule that all Catholics must attend Mass on Sundays and holy days of obligation.

Alan Cooperman, director of religion research at Pew, in reporting the findings of the latest survey, asked if Americans will have lost the habit of going in person to a church, synagogue, temple or mosque.

“Some commentators have suggested that just as the pandemic has accelerated the trend toward shopping online and made Americans reliant on the internet for work, school, health and entertainment, so might many, if not all, varieties of religious experience move online in the 21st century,” Cooperman commented. “But that’s not what the people who’ve been worshiping online see in their future. On the contrary, most U.S. adults overall say that when the pandemic is over, they expect to go back to attending religious services in person as often as they did before the coronavirus outbreak.”

Cooperman clarified that 43% of Americans didn’t attend religious services in person before the pandemic struck anyway, and don’t plan to start going to a house of worship when it’s all over. “But 42% of U.S. adults say they plan to resume going to religious services about as often as they did before the outbreak, while 10% say they will go more often than they used to, and just 5% anticipate going less often,” he said.

Similarly, a lot of Americans are not interested in virtual services: Two-thirds of U.S. adults say they have not watched religious services online or on TV in the past month. But of the one-third of U.S. adults who recently watched services online or on TV, relatively few (19% of this group, or 6% of all adults) say that once the pandemic is over, they intend to watch religious services more often than they did before it started.

Most online worshipers say that after COVID-19 has passed, they plan to revert to their pre-pandemic habits (18% of all adults) or watch online less often than they did before the outbreak (9%).

“Of course, it is impossible to predict how behavior will actually change after the pandemic, particularly if it extends further into the future than people expect,” Cooperman concluded. “But, at the moment at least, very few U.S. adults anticipate substituting virtual participation for physical attendance at their church or other house of worship: Just 2% of the pre-pandemic regular attenders think that in the long run they will watch services online or on TV more often – and attend in person less often – than they used to.”