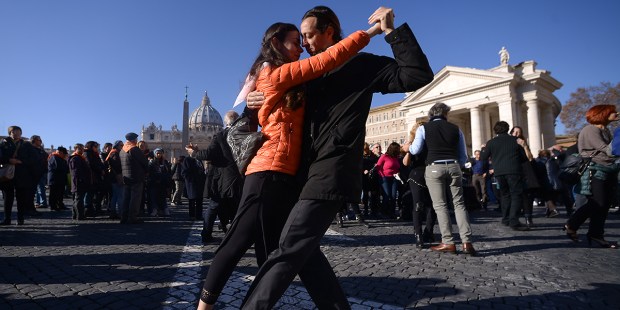 While Christianity has certainly looked down on dance in some eras, certain Successors of Peter have made their preferences known.

“Let them praise his name with dancing, making melody to him with tambourine and lyre. For the Lord takes pleasure in his people; he adorns the humble with victory.” Psalm 149, like many other passages in the Bible—most of them from the Old Testament—gives pride of place to dancing and celebration. The history of the people of Israel reminds us that women even celebrated military victories in this way, like the beautiful Miriam who, after crossing the Red Sea, hastened to lead the women in dancing to glorify God.

In certain epochs of Christianity, however, these bodily expressions were frowned upon, since many Church leaders associated dancing with pagan culture. This ecclesial rejection of dance seems to have continued over the centuries.

In 1914 one dance, the tango, became the focus of particular Vatican concern.

At the time, this Argentinian dance started to become better known and wildly popular in several European countries, including France and Italy. Faced with this craze, many prelates, such as the French Cardinal Léon-Adolphe Amette, opposed it. The affair took on such proportions that Pope Pius X himself is said to have decided to make up his own mind about tango by asking a couple of young Roman aristocrats, brother and sister, to perform a few movements of this hotly debated dance in front of him.

This episode, described by the French journalist Jean Carrière, then correspondent for the newspaper Le Temps, was published on January 28, 1914. “The two young people, moved and surprised, singing in a low voice the melancholy notes of popular Argentinean music, sketched before the attentive Holy Father the complicated comings and goings of the fashionable dance,” he wrote.

The furlana, the dance praised by Saint Pius X

Faced with the elaborate movements of the two Romans, the head of the Catholic Church was somewhat disappointed, said the journalist as he reported the dialogue: “’Is this what tango is all about?’ asked Pius X. ‘Yes, Your Holiness,’ he was answered. ‘Well, my dear children, you must not be having much fun! I understand that you love dancing. (…) But instead of adopting those ridiculous contortions (…) why not choose that lovely dance from Venice, which I often watched people dance in my youth, and which is so elegant, so clear (…): the furlana?'” (The furlana is an Italian folk dance.)

We must not forget that Pius X was born in Veneto (Italy) and that before becoming pope, he was Patriarch of Venice, Jean Carrière explains in his article. The journalist goes on to say that the pontiff ordered one of his servants to give a demonstration. However, a few days later, these remarks were denied by the Vatican as what we today would refer to as an example of “fake news.”

Proud of the success of this beautiful story, Jean Carrière didn’t surrender; he defended himself, saying, “Two points alone are interesting and deserve to pass on to History. True or false: did the pope, after having made fun of the tango, praise the furlana, this pretty Venetian dance which he had often seen in the land of his childhood, to which he remains attached with all his fibres? On these two points, there is no doubt whatsoever. The tango has been discussed in the Vatican; the furlana has been praised in the Vatican. That’s the main thing. Everything else is just gossip and chronicle!” he concludes.

Whether the story of Pius X and the tango is legend or reality, no one will ever know. But the dialogue attributed to him on the subject of Venetian dance was enough to create a real craze around the furlana, to the point where at the beginning of the 20th century it was baptized “the dance of the pope,” in opposition to the tango, the dance of sin. In his book Danser en société, sociologist Henri Joannis Debern even reports that a good number of hotels on the French Riviera took a pragmatic approach, and had dance teachers who taught both the tango and the furlana, to satisfy both “good Catholics” and everybody else.

Read more:
Watch these Italian friars and sisters take to the streets to dance (very impressively)

The excitement around this mysterious dance praised at the Vatican lasted only a short time, and the furlana disappeared during the First World War. A few years later, in 1922, Pope Pius XI seemed to condemn all dances in one fell swoop, without making an exception for the Venetian dance. “The limits imposed by modesty are exceeded, especially in fashions and dances … ” he said in a speech to the bishops, which mentioned the many evils caused by the war.

We have to wait for John Paul II, a poet and man of the theater, for a pope to openly shine on the dance floor, long before his election. As a young man, “Lolek” (as one of his Jewish friends dubbed him) joined the high school dance class. Polish waltz, Viennese waltz, English waltz, mazurkas … he enjoyed swirling his partners in dance halls, although without accepting private invitations. “Lolek, thanks to his sense of music, was perhaps the best, and the most graceful of the students in the class, especially when he had Halina Krolikiewicz as his partner,” his comrade humorously recounts, referring to a young woman whom Karol Wojtyla admired.

Francis and the passion for tango

Unquestionably the most enthusiastic dancer of all the popes together, Pope Francis has never hidden his unconditional love for tango. “Jorge was a great tango dancer” and he liked the dance a lot, says his childhood friend Anna Colonna, as recounted by his biographer, Austen Ivereigh.

As a Jesuit, the future pope met one of the greatest tango performers of all time, Azucena Maizani, and administered Last Rites to her in 1970. No wonder, then, that to celebrate his 78th birthday, a crowd of tango enthusiasts flocked to St. Peter’s Square to offer him a demonstration of his favorite dance. Publicized on Facebook by Cristina Carmorani, a dance teacher at Conventello, this initiative brought together 3,200 dancers.

Beyond his passion for Argentinean dance, Pope Francis has restored once and for all the biblical meaning of dance, and sees in this activity a way of praising God. “Dancing is an expression of joy, of gladness,” he simply said to a little Albanian girl in a letter quoted in a book published in 2016.

In one of his catecheses, in 2014, he does not hesitate to contrast the “dance of joy” performed by King David to cold prayer.

UPDATE: Article has been modified to correct quote from Pope Francis’ biographer.

See earlier pieces in this series: