A Catholic priest’s homily at the funeral of his son 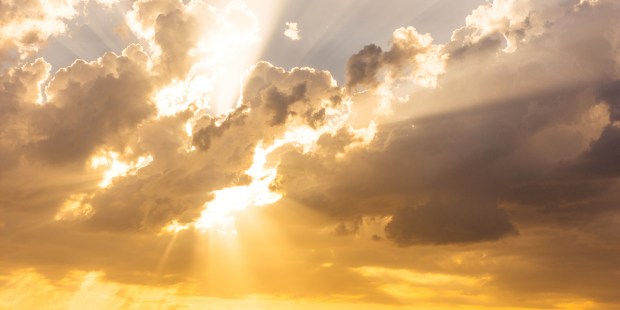 Fr. Albert Scharbach, a priest with the Ordinariate, presided at the Reqiuem Mass for his son Isaac, and his words are moving hearts.

On Saturday, August 1, in Upperco, Maryland, 21-year-old Isaac Scharbach was struck and killed by a vehicle while cycling on a country road. Isaac is the second of nine children and the oldest son of Fr. Albert Scharbach and Abby Scharbach, who entered the Catholic Church with their family in 2009 at the Baltimore Basilica. Fr. Scharbach, a former Anglican priest, was ordained a Catholic priest for the Ordinariate in 2013, and he is currently the pastor of Mount Calvary Catholic Church in downtown Baltimore.

Fr. Scharbach presided and preached at the Requiem Mass for his son on the feast of the Transfiguration, August 6, 2020. Isaac is remembered for being exceptional in many ways, perhaps most of all for his virtue and the depth of his interior life — which Fr. Scharbach speaks to in a homily that has moved many hearts.

(The text of the homily is below the video if you prefer to read it.)

“And He was transfigured before them.”

This is a Requiem Mass with a Transfiguration theme. The word Requiem is Latin for “rest,” which we get from the opening words of Mass: “Rest eternal grant unto them, O Lord.”

In our Gospel reading on the Transfiguration, we see Christ shining in light. We can make a connection with the faithful departed who are ultimately transfigured in Christ. In the Scriptures, Paul gives “thanks to the Father, who has qualified you to share in the inheritance of the saints in light.” Whatever is true about Christ ultimately becomes true of us who are called by His name.

So on one level, we could take comfort by saying “Isaac is in light now — he’s in the Church Expectant and on the way to the Church Triumphant. The light that he had on earth will only become brighter.” And there is certainly comforting truth in that.

But if we stop there, that point would not fully serve us today. Why? Because Isaac had a lot more to give in this world.

Many know about Isaac’s unwavering desire to serve others, and how this was rooted in his constant prayer and consummate love for God. Others have spoken about Isaac’s extraordinary intellect, his talent in art, but more importantly, his humility in using these gifts.

I knew of Isaac’s sanctity at home, but I’ve learned from the testimonies that have poured in over the last few days about how he had touched hundreds of lives. I’ve been awestruck by how many people he’s moved to renew their faith or believe for the first time.

But it seemed like he was just getting started when his light was snuffed out. This is what we call a tragedy. We need to look that in the face.

Scores of people have told us, “We’re devastated.” “We’re shattered.”  “I cried and cried.”

These responses have even come from many people who haven’t seen Isaac in years, so the grief at his passing is not necessarily due to a void in their life. It speaks to the apparent injustice of a fallen world. If this can happen, then what is sure? All things seem more fragile then we once thought and beyond our control.

We may not want to admit it to ourselves, but the question underneath the disappointment and dismay is, “Where is God in this?” And “Why would He let this happen?” This threatens to shake our faith.

But there’s a question that not many are asking, but that the feast of the Transfiguration calls us to ask. That is, what if Isaac’s death serves God’s gracious purposes most of all? In order to be bold enough to ask this question, we need to look closer at the Transfiguration.

Many see the Transfiguration as hope after the cross.

Beyond His earthly humility, and what He is destined to be.

The idea: this will strengthen the disciples to get through the cross.

But that is the wrong view.

The cross is not just something to get through. It is something we need to emphasize and shine a light on more thoroughly.

Consider the context. Just before today’s reading in the Gospel of Matthew, Jesus predicted the cross, but Peter tried to stop it.

And then on the mountain, it says He was talking with Moses and Elijah. What were they talking about? The topic of their conversation is revealed in Luke. They were talking about things that must soon take place—that is, His “departure” at Jerusalem. That refers to the cross.

The Greek word for “departure” in some versions is called “His exodus” which, as we know, was only possible for God’s people through the death of the lamb. Moses and Elijah were talking about how Jesus would suffer and die before He was raised. This is what our Lord was dwelling on in the midst of the majestic light.

What does this look like in life? Little crosses all day long. Giving things up for others. These decisions are what lead to the greater cross of being willing to lay down one’s life.

It is said that a heroic action is rarely a big decision. Rather, it’s the culmination of many decisions made day-in and day-out that form one’s character so as to create one’s natural response at the time of trial.

Back to our Isaac …

This is what we saw in his life—it seemed like he would give up anything for anyone at anytime. No exaggeration, no hyperbole. He would sacrifice food and comfort or his immediate plans for the call of the moment to serve others.

This response was grounded in prayer, which always came first, continued throughout the day, and preceded any significant undertaking.

Last night, one of Isaac’s college friends, Harrison, recounted how Isaac commended to him the words of the first martyr, Stephen: “Into thy hands I commit my spirit.” That’s what Stephen said at the moment of his death. Isaac was saying that these are words to live by. He was saying that you should repeat these words so that you’re constantly giving yourself up in death. Just another dorm room conversation.

Isaac was following Stephen’s lead, but at the center of this is Jesus’ lead. We can follow because Jesus went ahead of us. Jesus shows us that God’s light shines on our cross.

So back to our original question …

Why would God cut short the life of someone who was so dedicated to our Lord and His cross? My answer: Only if it served a greater purpose. I have to believe that. I don’t see this with human perspective, but I can see this with the eyes of faith. This isn’t Pollyanna. This is real sight.

Isaac gave himself for others in his earthly life, and he can continue to intercede for others after his earthly life. Consider this: in the book of Revelation, the saints are in heaven praying about what is happening on earth, and the incense in the vision represents their prayers (Rev. 8:3-4).

Let’s connect that to what we read in James: “The effectual fervent prayer of a righteous man availeth much” (James 5:16). If the prayer of a righteous man is effective on earth, then how much more when righteousness is perfected in heaven! We read in Hebrews 12: You have come to the “heavenly Jerusalem … to the assembly of the firstborn enrolled in heaven … and to the spirits of the righteous men made perfect” (Heb. 12:23). The prayers of these righteous men made perfect avail all the more. This is a dynamic that has proved true in the Church throughout the ages. We can’t ignore it.

In light of this, let’s ask another question. Could it be that Isaac could do more work interceding from heaven than he could on earth?

So someone says, “Yes, but why not have him live longer and then do that after old age?” This objection occurred to me—very heavily—two days ago. But then I thought again. In 50 years, it would be too late for him to be interceding for you, wouldn’t it? How much better for him to be interceding for those he knew on earth—those who are already close to his heart and need his prayers.

Isaac was always ready to give all, and I think his death is an answer to prayer. On one level he wanted this.  I’m going to dare to say that. He wouldn’t have asked for these events specifically, of course. But he would have offered himself completely for others in total abandonment to God’s will.

He’s the kind of person who would have prayed regularly: “O God, if there is anything that I can do to help my family in such-and-such a way, or to make You known to others, I will do it. I will give my life, even.” Or some other words to that effect. Isaac made a daily self-offering to God.

And now he is on the way from the Church Militant to the Church Expectant and Triumphant where he will be called to intercede.

Look, I already see good things—nearly miraculous things—coming about as a result of his death. Relationships healing. The fog lifting on some big problems due to the loving response of God’s people in these immediate circumstances. There is no way that I could go into detail about this now, but you have to take my word for it.

Then there is the gift of the cross that we bear. We still want Isaac back and we miss him terribly. He was my best friend. My wife will tell you this is agony. Yes, he leaves an enormous void in our lives.

But I’m already seeing that this void is being filled in our family as we adopt more of his Christ-like approach to one another. Already, this is making me softer and more compassionate toward others. And this is reminding me of the importance of family. This is what Isaac wants for us. And it’s only the beginning.

This homily is not about Isaac but about the Gospel. I’ve used his life as an illustration because that’s what has drawn us here. But this is not his story, this is Jesus’ story. We’re called to see our story in Jesus’ story. In this we find that nothing is lost to God. Nothing is beyond the reach of God’s redemption.

St. Faustina said, “If the angels were capable of envy, they would envy us for two things: one is the receiving of Holy Communion, and the other is suffering.” Why? Because God’s power is made perfect in our weakness. And in that, God is glorified.

Yes, Jesus’ Transfiguration foretold of victory — He is the eternal victor. But He is also the eternal victim. These two realities cannot be separated, as His majesty includes His cross. This cross was something that only He could bear, but He calls us to follow by grace to reflect our family likeness to Him. Because of this, there is majesty in this tragedy! And we will always see this event bathed in God’s redemptive light.

Read more:
Give thanks after Communion with this stirring prayer from the Ordinariate liturgy