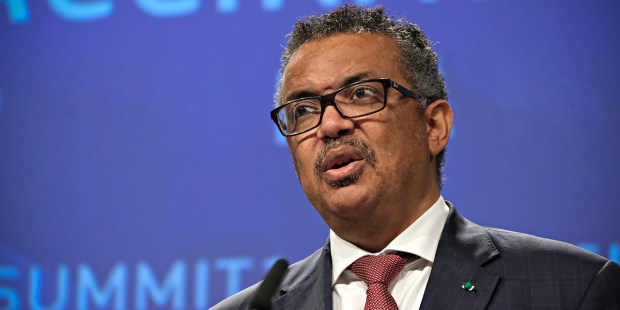 “We must make health a human right for all and not allow it to be a privilege for the few.”

The director-general of the World Health Organization, Dr. Tedros Adhanom Ghebreyesus, voiced support for a call Pope Francis made during the Wednesday general audience, that an eventual vaccine for Covid-19 wouldn’t be available only to those of rich countries, but to everyone.

“I couldn’t agree more with Your Holiness,” Ghebreyesus Tweeted on Thursday evening. “The #Covid19 pandemic shows that we must make health a human right for all and not allow it to be a privilege for the few.”

He added, in line with the pope’s overall reflection, “It also gives us an opportunity to rebuild a better, safer, fairer world – together!”

Read more:
Pope Francis: “The preferential option for the poor is at the center of the Gospel.”

Ghebreyesus had made similar observations the day before the pope’s speech, in considering the logistic challenges involved in combatting the Covid-19 pandemic.

In his statement, Ghebreyesus noted numerous logistics failures in the initial response to the disease, saying, “Supply nationalism exacerbated the pandemic and contributed to the total failure of the global supply chain.”

This led to a serious lack of key supplies for dealing with the novel coronavirus in several nations. Even now, he said, “many countries still do not have enough.”

Ghebreyesus said it is imperative to learn from past mistakes. “While there is a wish among leaders to protect their own people first,” he said, “the response to this pandemic has to be collective.”

“This is not charity,” he added. “We have learned the hard way that the fastest way to end this pandemic and to reopen economies is to start by protecting the highest risk populations everywhere, rather than the entire populations of just some countries.”

Ghebreyesus also insisted on the need “to prevent vaccine nationalism.” After a vaccine is developed, he said, the WHO recommends first allocating vaccines proportionally “to all participating countries simultaneously, to reduce risk”; and then, in phase two, for consideration to be given “to countries in relation to threat and vulnerability.”

The WHO Director said this means “elite planning at the highest levels is needed right now to prepare to vaccinate and treat the world as new technologies come down the pipeline.”

He insisted, “As we accelerate the science, solidarity is needed to provide a joint solution to the pandemic.”

“Like an orchestra,” Ghebreyesus said, “we need all instruments to be played in harmony to create music that everyone enjoys.”

He said the WHO “will work to bring the band together, to promote science, solutions, and solidarity because we believe to our core that we do it best, when we do it together.”

Read more:
Are we back in the Middle Ages? Who will save us?