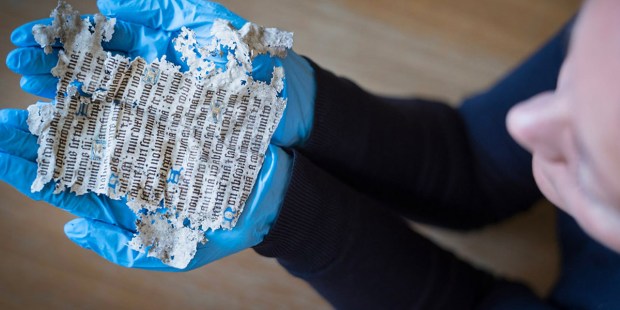 In the East of England, a historic manor building is slowly giving up its secrets.

Those secrets include the fact that the residents of the 15th-century Tudor manor were clandestinely practicing the banned Roman Catholic faith.

Archaeologists found artifacts hidden for centuries under the floorboards of Oxburgh Hall in Norfolk, which was built by Sir Edmund Bedingfeld after he inherited the estate in 1476.

The finds include a 15th-century gold leaf illuminated manuscript, thought to be part of Psalm 39 from the Latin Vulgate Bible, and a 1568 copy of The Kynges Psalmes by St. John Fisher, according to the Catholic Herald.

The building had been undergoing a £6 million restoration before the coronavirus pandemic interrupted the work. That gave Matt Champion, an archaeologist, a chance to explore Oxburgh Hall’s attic rooms on his own. Eventually, Champion began finding document fragments and sewing materials beneath the floorboards in the northwest end of the house.

“Then a series of large rats nests were discovered which, amidst the debris, contained hundreds of fragments of period clothing, musical scores, handwritten documents and printed pages,” the Herald said.

The family that owned Oxburgh Hall were devout Catholics. Because they refused to abide by the 1559 Act of Uniformity, they were persecuted and ostracized. They would also shelter priests at the manor, who had to say Mass in secret.

Bedingfeld’s descendants still live in part of the building, said the BBC.

Anna Forest from the National Trust, who oversaw the excavation, said that that psalm that was discovered may be from a Psalter, “but its small size — just 8cm x 13cm — suggests it once was part of a Book of Hours. These portable prayer books were for private devotion.”

James Freeman, Medieval Manuscripts Specialist at Cambridge University Library, helped identify the leaf and said that it likely belonged to a small prayer book, which may have been used for secret Masses, said Artnet News.

Forest said that dust — at points inches thick — over a layer of lime plaster covered the objects, serving to draw out the moisture from the debris. Thus, much of it was perfectly preserved over the centuries, according to Artnet.

Russell Clement, General Manager at Oxburgh Hall, said the team had hoped to learn more of the history of the house during the repair work “and have commissioned paint analysis, wallpaper research, and building and historic graffiti recording.”

“But these finds are far beyond anything we expected to see,” Clement said. “These objects contain so many clues which confirm the history of the house as the retreat of a devout Catholic family, who retained their faith across the centuries. We will be telling the story of the family and these finds in the house, now we have reopened again following lockdown.

“This is a building which is giving up its secrets slowly,” he concluded. “We don’t know what else we might come across – or what might remain hidden for future generations to reveal.”