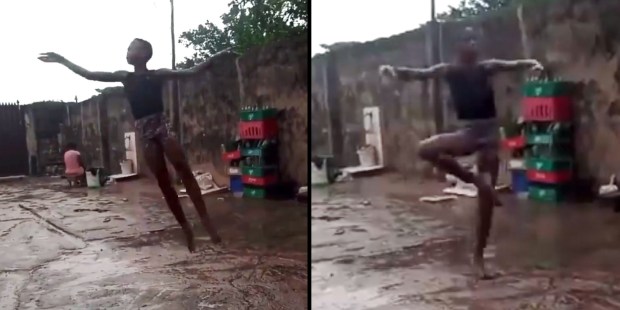 His talent is undeniable, and now he’s getting a rare opportunity to train at the highest level.

“Whenever he is dancing, I feel happy, I have joy watching him dancing,” says the mother of Anthony Mmmesoma Madu in an interview with the BBC.

Anthony is an 11-year-old boy from Lagos, Nigeria, whose dancing has gone viral thanks to a video of him performing ballet in the rain. It looks like an unlikely stage: an uneven cement patio, with trash and crates of empty bottles piled against an unpainted wall, and what looks like a woman washing clothes in a bucket in the background. Yet Anthony seems to be in a different world as he gracefully pirouettes, leaps, and poses elegantly.

11-year-old Nigerian dancing sensation Anthony Madu tells us about his dreams of becoming a professional ballet dancer and wowing the world with his talent. 🎥 📸@camerassassin pic.twitter.com/adKz38xSm2

The video caught the attention of celebrities such as actress Viola Davis, who won an Oscar for her role in the 2016 film Fences. She retweeted the video and commented, “Reminds me of the beauty of my people. We create, soar, can imagine, have unleashed passion, and love … despite the brutal obstacles that have been put in front of us! Our people can fly!!!”

Reminds me of the beauty of my people. We create, soar, can imagine, have unleashed passion, and love….despite the brutal obstacles that have been put in front of us! Our people can fly!!! ❤ pic.twitter.com/LNyWD2ZoU0

Anthony got more than just 15 minutes of fame from the video’s success: A Reuters article in the Washington Post reports that the American Ballet Theatre has given him a scholarship to train virtually this summer, using internet access they’ve arranged for him. Next year he will travel to the United States to continue his ballet studies there, thanks to a scholarship from Ballet Beyond Borders. The Post reports that the video has also inspired many people to make donations to the Leap of Dance academy in Lagos, where Anthony has been studying until now.

Read more:
One mother’s letter encouraged the New York City Ballet to do something amazing

Ballet: For both boys and girls

“When people see ballet they think it is only for girls,” Anthony told the BBC. “It’s for both boys and girls,” he says, quoted by the Leap of Dance Academy. His coach at the academy is a role model for him. “When he’s dancing I feel very happy, as if it is me that is dancing,” Anthony says during the BBC interview. Indeed, the Academy reminds its Instagram followers that “When ballet was created 400 years ago, it was created for men. Men were the first dancers.”

Anthony’s mother is very supportive, although at first his interest in ballet took her by surprise. According to the Reuters article in the Washington Post, his parents were hoping he’d become a priest, but rather than impose a path on him, they’re supporting his passion. “My advice to parents is when they discover any talent in their children, they should follow it up and give their full support so that the child will go far with the talent,” his mother told the BBC.

The Leap of Dance Academy makes a point of acknowledging that kind of parental support, saying, “Special shout-out to all parents who have allowed their boys to dance.”

As a dance school in Africa, and Nigeria to be precise our academy stands to educate our audience that ballet is here to stay; "It's for both boys and girls'' said Anthony Mmmesoma Madu. (When ballet was created 400 years ago, it was created for men. Men were the first dancers. a @collagedance ) Special shoutout to all parents who have have allowed their boys to dance. Speaking from the Nigerian perspective most children are enrolled in school to have a white collar job but never to become a dancer. We hope supportive and inspirational mom like Anthony's mom has given us a reason for early child talent discovery. We are the Nigerian ballet school. A heartfelt thank you to our partners @blacksinballet @ingridsilva @jmentzos @fabiocmariano @m.s.t_dance_center @ruangaldino @travelingtutusinc @fernandomontan0 @thalemawilliamsstudiosusvi @grishkoworld @nikolayworld @bbcnews @graceekpu @balletnoire @abtschool @hurkmanslinda @katwildish #boys #blackboydancetoo #boyswillbeboys ##boyscan #blackboysrock #blackdancers #goboy #dancer #blacklivesmatter #qualityaboveall #nigerianballetschool #nigeria #leapofdanceacademy #vocationaltraining #boys #dancingintherain #viralvideo #vocationalballetschool #goon #bbc #bbcafrica #bbcnews #2020

“Speaking from the Nigerian perspective, most children are enrolled in school to have a white collar job but never to become a dancer. We hope supportive and inspirational moms like Anthony’s mom have given us a reason for early child talent discovery. We are the Nigerian ballet school,” adds the Academy’s post.

Anthony is a truly talented boy, and we wish him a wonderful experience training in the U.S. and continuing his study of ballet. Perhaps one day we will see him perform at a ballet theater in our own city!