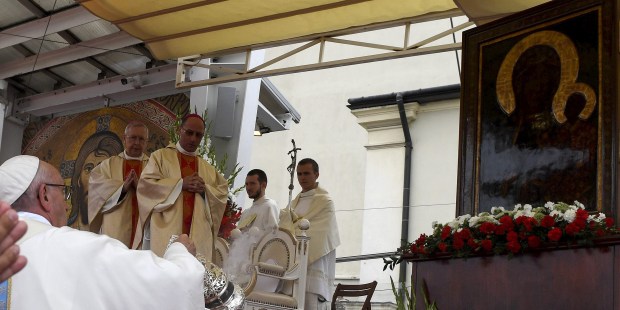 On this feast of Our Lady of Czestochowa, Francis joins nation’s bishops in entrusting humanity to her motherly care.

In his greetings to Polish-speaking faithful during the weekly general audience, Pope Francis took note of today’s feast of Our Lady of Czestochowa, honored as the Queen and Protectress of Poland.

Recalling his own visit to the Shrine of Jasna Gora during his visit to Poland for World Youth Day in 2016, the Holy Father said, “I unite myself today to the thousands upon thousands of pilgrims who are gathered there, together with the Polish episcopate, to entrust themselves, their families, the nation, and all of humanity to her maternal protection.”

Pope Francis invited the faithful gathered at the Shrine to “pray to the Blessed Mother to intercede for us all, especially for those who in different ways are suffering from the [Covid-19] pandemic, and bring them relief.”

The Polish Episcopal Conference met together at Poland’s national shrine ahead of their 386th plenary assembly, which formally opens on Thursday in Jasna Gora. It is the first plenary meeting held this year, as earlier gatherings scheduled for March and June were cancelled due to the coronavirus pandemic.

Devotion to the Blessed Virgin Mary goes back to the earliest days of Christianity in Poland, says Father Michal Legan, spokesman for the Jasna Gora Sanctuary. “It was the most important sign of the Lord’s grace during the very, very difficult history, even in the darkest moments of our national history,” he said in an interview with Vatican Media’s Emanuela Campanile. “Even in the darkest hours of the personal story of each of us, she was present, and she was the point of the hope and of the faith,” he said.

“She’s the most important way to Jesus” for each of us, he added.

Read more:
Why does the Black Madonna of Jasna Gora have scars on her face?

Father Legan said that throughout the pandemic, the people of Poland “are looking to Our Lady with faith and prayer, with all our hopes.” That, he said, “is why the Polish episcopate is gathered here during the feast of Our Lady of Czestochowa, to proclaim the act of devotion an act of love and hope,” to express to the Madonna “that we of the nation are her children and we want her as our queen.”

Father Legan noted that, during his visit to Jasna Gora four years ago, Pope Francis said Poland had a great privilege, “because we have our mother as the queen, and our queen as the mother.”