Pope meets with man who lost both parents to Covid 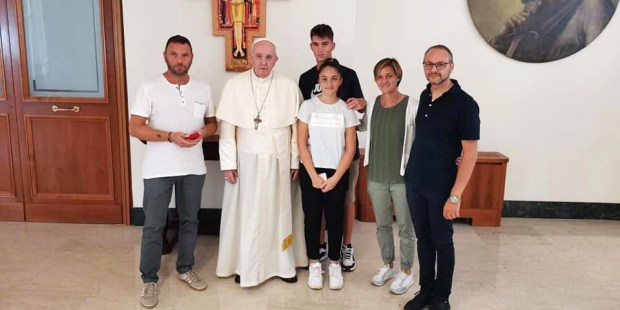 Francis told him that the anger of grief is a form of prayer.

Carlo Chiodi, a 50-year-old bus driver from Italy’s hardest hit region of Bergamo, lost both his elderly parents to Covid. Pope Francis invited him to come to Casa Santa Marta last Sunday with his family, and after Mass, the Holy Father spent several minutes with them.

Just some moments after that encounter, when the pope led the midday Angelus, he asked everyone to keep the victims of coronavirus in our prayer:

And let’s not forget, let’s not forget the victims of the coronavirus. This morning I heard the testimony of a family who lost their grandparents without being about to say goodbye to them, on the same day. So much suffering, so many people who lost their lives, victims of this disease; and so many volunteers, doctors, nurses, sisters, priests, who also lost their lives. Let us remember the families who have suffered because of this.

Read more:
Pope: Do you have the courage to be angry with God? It’s a form of prayer

Speaking to a newspaper from Bergamo, Chiodi said that the pope told him “sorrow and anger are human. To get mad is normal and it is a form of prayer when you are alone and you feel pain. He went on to say that to resign yourself and convince yourself not to suffer isn’t the solution. We must free ourselves from the weights that afflict the heart.”

Chiodi recounted that Francis said he “feels the sorrow of the world in himself, and that he prays every day to God to understand the meaning of this suffering. During our meeting, we trembled. We were open to the humanity of the pope.”