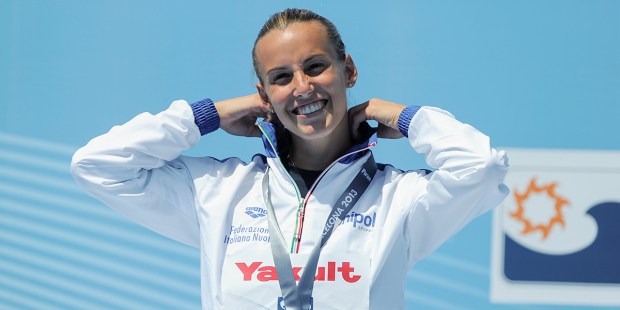 “A child is worth more than any medal,” she says.

Tania Cagnotto won a gold medal for diving at the 2015 FINA (International Swimming Federation) World Championship, and silver and bronze medals at the Olympic games in Río de Janeiro in 2016. This wasn’t a big surprise; her parents were both Olympic divers before her, and her father, Giorgio Cagnotto, won four Olympic medals in the 1970s and ’80s.

She’s also a mother; her first child, Maya, is two years old. Tania discovered she’s pregnant again while training to compete on the Olympic team in Tokyo as both an individual swimmer and in synchronized swimming with her friend Francesca Dallapè. It would have been her sixth Olympic games and her first as a mother.

She gave birth for the first time on January 23, 2018, and in August of that same year she announced that she was training once again for the upcoming 2020 Olympics in Tokyo (now postponed until 2021 due to the pandemic), challenging athletes 20 years younger than she. However, even back then she told Italian news outlet Corriere della Sera,

“I live only for Maya. I gave birth in water and she already really loves the swimming pool: we could say that she’s always been a little fish. I’d like to have a second child. Hopefully – supposing that I qualify to compete – after Tokyo. But if I get pregnant again, I will renounce the podium. A child is worth more than any medal.”

“I chose life and family”

On her Instagram account, she broke the wonderful news to her fans with her simple and sincere style, much appreciated by the public:

“Here we are … I’d said that close to September I’d decide whether or not to continue my path towards Tokyo. It’s been a truly difficult decision … On one hand, I wanted to participate in my 6th Olympiad, as a mother, with a great dream of carrying the [Italian] flag, and on the other hand, I wanted to grow our family. And so, this time I chose life and the family, and a little later destiny chose to give me the gift of a new life inside me. I’m already happy about my decision.

I know that many of you wanted to see me one more time on the diving board, and I’m sorry to have let you down, but during this lockdown, as has happened to many other people, I’ve had time to reflect and understand what is most important to me. I no longer had that willpower (which guided me for 20 years) to commit myself and sacrifice myself in the way that the Olympics require! I’ve always honored all the Olympics and I wouldn’t have been able to do it differently this time as well!”

She goes on to thank her swimming partner Francesca Dallapè and her fans for believing in her and giving her the strength to try again, and she promises to continue sharing her life. She says it’s only “see you later” and not “goodbye” when it comes to diving, and jokes that her older daughter Maya will, after all, need a coach.

These words of hers about choosing life and family are particularly inspiring coming from an athlete of her caliber. She has chosen to dive into becoming a mother a second time instead of diving into a Japanese swimming pool.

Reflecting on priorities during lockdown

In a more recent interview, she told Corriere della Sera more about what went through her mind during the coronavirus lockdown:

“If I wait to get pregnant, will a second child arrive when I’m 36? The pause of the lockdown made me reflect on values and priorities … The Olympics as a mother would certainly have been a gift to myself: with medals already in my pocket, for the first time in twenty years I’d have been able to train without pressure. Make time for myself, dream again … I liked the idea. But then destiny intervened.”

Her decision to embrace motherhood and make it her first priority was supported by her friend and swimming companion Francesca Dallapè. Cagnotto told the Corriere, “When I told her I was pregnant, Francesca smiled, saying, ‘Tania, in your situation, I’d choose to have a child too.’ I saw a flash of relief in her eyes: deep down, she too had wanted to change her life.”

Tania’s whole family supports her, and not just her husband Stefano and her daughter Maya. Her parents, Giorgio and Carmen, are also in seventh heaven, and Tania has admitted that her mother, who was also a competitive diver in her youth, had never been in agreement with Tania going back to training for the Olympics.

Would she prefer a boy or a girl?

She told the Corriere, “We don’t know yet [which it is]. Maya has asked for a little sister, I’d like a little boy, and Stefano doesn’t have a preference. I grew up as an only daughter and I loved it, but I want to give Maya someone to grow up with in this complicated world.”

We wish Tania and her beautiful family all the best as they prepare to welcome their sweet little one!

Read more:
From the Olympics to the convent: The story of Kirstin Holum