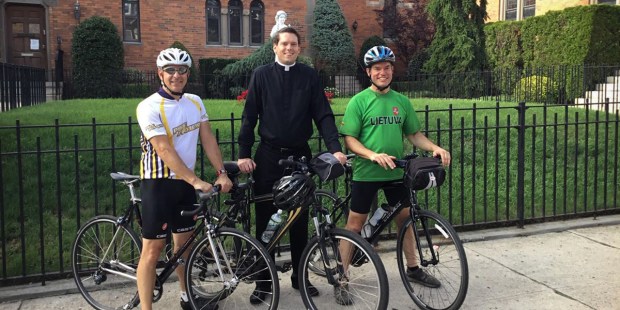 He’s not an athlete, and he had never biked anywhere near this distance, but this priest was determined to help out his parish.

The pandemic caused by the coronavirus has created difficulties for many parish communities, but it has also awakened the inventiveness of many priests. Such is the case of Fr. Christopher Heanue of Holy Child Jesus Church in Richmond Hill, New York, a parish belonging to the Diocese of Brooklyn.

Fr. Heanue, a young man of 32 years of age ordained by the Diocese of Brooklyn in 2015, is the administrator and parochial vicar of Holy Child Jesus Parish in Queens. He doesn’t consider himself an athlete, but with Christ he became a rather daring one for a day, performing a feat that was covered by various media outlets, including in a recent article by Catholic News Service (CNS).

A hundred miles of hope

On the morning of July 27, he began by celebrating Mass at 5 a.m. and then embarked on a 100-mile bike ride that he called “100 Miles of Hope” to raise funds for programs that help the needy in his parish.

Accompanied by two parishioners from the neighborhood—Paul Cerni and Tom Chiafolo—Fr. Heanue set out to bike the 100-mile itinerary with a two-fold purpose. He wanted to bring hope and optimism to his parishioners, and of course, to raise funds for their outreach programs. Fr. Heanue told CNS that this was the longest bike ride he’d ever done.

The day was very hot. The three cyclists left Queens at 5:45 a.m. and arrived at their destination, Holy Trinity Church in East Hampton on Long Island, around 4 p.m.: approximately seven hours and 45 minutes of pedaling, plus necessary stops for meals and hydration.

Everything is possible with Jesus

The priest described it to CNS reporter Ian Alvano as an “extraordinary experience,” during which he was encouraged by a verse from St. Paul: “I can do all things through Christ who strengthens me” (Phil. 4:13).

One of the goals of the long and tiring journey was to raise funds for the parish food pantry and other outreach programs, so in preparation for the ride he created a crowdfunding page on GoFundMe, beginning with a goal of a thousand dollars. As that was quickly raised, he upped the ante first to $5,000; then, when that goal was reached, to $10,000. He also used fundraising tools on Facebook and GiveCentral, raising a total of more than $20,000 across the three platforms.

That’s certainly a good harvest, and a good source of encouragement for other priests to consider creative methods to support and involve their parishioners and their parish.

Read more:
These priests and nuns are running a 5K for Catholic education

Given the heat and the distance of his longest bike ride ever, it was a real challenge for Fr. Heanue. He kept in mind the fundraiser, however, which—thanks to modern technology—he could follow in real time while on the road. He told CNS that, at one moment when he was particularly “exhausted and sweaty,” he received a text message about a donation. “It was quite an inspiration for me, and I mentioned it to the guys that someone else just donated!”

In addition to the fundraiser, Fr. Heanue was also praying for some specific intentions, which he later shared with CNS. He was praying especially for a “young boy who had lost his father because of COVID-19, a couple who were having pregnancy issues, and for a woman who had just lost her child through complications of her pregnancy.”

Without being much of an athlete (in his own opinion), without having biked such a long distance before, without extensive preparation (he only had taken up biking seriously since the beginning of the pandemic, and his practice ride had been only 52 miles long), but with the desire to be able to provide his parish with resources lost because of the pandemic, he biked “100 miles for hope.” The short-term results were far more than he had expected. Let’s hope that the long-term results of his example and dedication will bear fruit not just for his own parish, but for all those touched and inspired by his story.

Read more:
Bike your way to the sanctuary of the patroness of cyclists