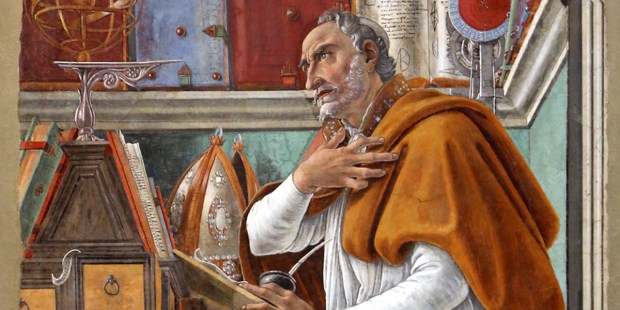 St. Augustine was able to overcome his addiction to lust by reading passages of the Bible.

St. Augustine wasn’t always a saint, and for much of his life he was addicted to sexual sin. In his Confessions, he describes his lustful addiction as a “chain.”

My will was the enemy master of, and thence had made a chain for me and bound me. Because of a perverse will was lust made; and lust indulged in became custom; and custom not resisted became necessity. By which links, as it were, joined together (whence I term it a chain), did a hard bondage hold me enthralled.

It was difficult for him to break the chains of his sexual addictions, but a turning point for him was in reading the Bible.

He explains how one day he cried out to God in anguish and asked God to remove from his heart his lustful habits.

I flung myself down, how, I know not, under a certain fig-tree, giving free course to my tears, and the streams of my eyes gushed out..I sent up these sorrowful cries — “How long, how long? Tomorrow, and tomorrow? Why not now? Why is there not this hour an end to my uncleanness?”…I was saying these things and weeping in the most bitter contrition of my heart, when, lo, I heard the voice as of a boy or girl, I know not which, coming from a neighboring house, chanting, and oft repeating, “Take up and read; take up and read.”

This voice startled him and he immediately searched out the book, which was a collection of scripture passages.

So, restraining the torrent of my tears, I rose up, interpreting it no other way than as a command to me from Heaven to open the book, and to read the first chapter I should light upon … I grasped, opened, and in silence read that paragraph on which my eyes first fell — “Not in rioting and drunkenness, not in chambering and wantonness, not in strife and envying; but put on the Lord Jesus Christ, and make not provision for the flesh, to fulfill the lusts thereof.” (Romans 13:13-14) No further would I read, nor did I need; for instantly, as the sentence ended — by a light, as it were, of security infused into my heart — all the gloom of doubt vanished away.

It was a monumental moment in St. Augustine’s life, and while it didn’t cure him of his temptations, it started him off on the path of virtue.

He would continue reaching for the Bible, and began to devour it more and more each day. Slowly, and with God’s grace, he was able to overcome his sexual sins and embrace a life of chastity.

Many who are addicted to pornography use this method of St. Augustine and begin reading the Bible whenever they are tempted. It may be useful to keep the Bible close to the computer or phone, so that it remains a constant reminder.

The good news is that freedom is possible through the grace of God.

Read more:
When struggling with temptations, try these powerful remedies