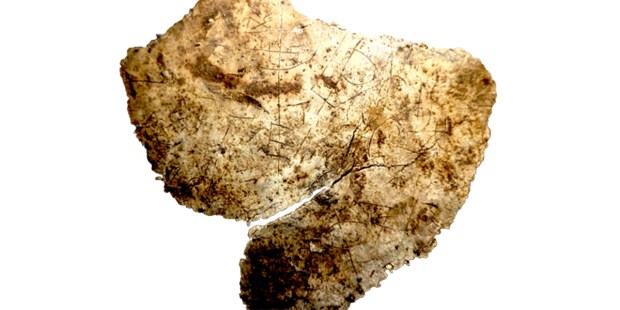 The artifact has also helped date the ancient Roman fort of Vindolanda.

The ruins of an early Christian church connected to a stretch of Hadrian’s Wall, located in Northumberland, have yielded the earliest known example of Christian graffiti in Britain. The images, which include crosses, chi-rhos, angels, a priestly figure, fish, a whale, and ships, were discovered on a chalice that was dated to the 5th century.

Dalya Alberge of the Guardian reports that the excavation was part of a larger effort at Vindolanda, an ancient Roman fort just south of Hadrian’s Wall. The chalice, made of lead, was discovered in 14 pieces underneath the altar, which, the report notes, saved it from complete destruction when the roof collapsed.

Alberge spoke with Dr David Petts, an expert in the Post-Roman period from Durham University, who highlighted the significance of the find. He said:

“When we think of graffiti, we tend to think it’s unauthorized vandalism. But we know from many medieval churches that people would put marks and symbols on buildings. What is unique about this is finding them on a vessel.”

The report goes on to note that alongside the images were letters in Latin, Greek, and possibly the old Irish language of Ogom; however, they have yet to translate any full words.

Alberge also spoke with Dr. Andrew Birley, director of Vindolanda excavations, who added that the dating of the chalice fragments has helped to fasten a date to the Vindolanda fort, which has been hard to place, as there have been few relics discovered within.

The chalice is soon to be displayed in the Vindolanda museum.

Learn more from the comprehensive report by The Guardian’s Dalya Alberge.