Pope notes delight to be with pilgrims again for audience 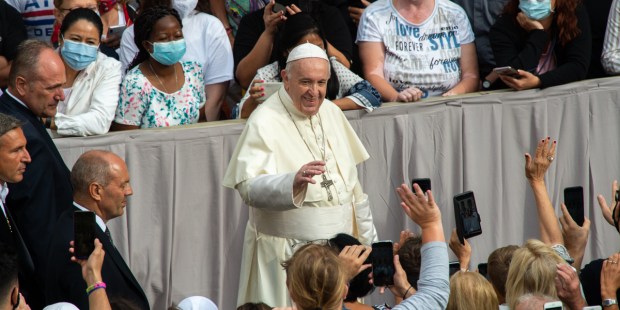 Urges planet to find its way out of the pandemic with “solidarity,” correctly understood.

Though the blessings and waves came from an unnatural-looking distance, Pope Francis was clearly happy to be with the faithful again at the first general audience held in public since Italy began its lockdown last spring.

“After many months we meet each other again our face to face, rather than screen to screen. Face to face. This is good!,” the pope began his address saying.

The audience was held in the San Damaso Courtyard of the Vatican’s Apostolic Palace, accommodating about 500 people, who had their temperatures taken before they entered the square.

The Holy Father continued his catechesis series on the Catholic principles of social doctrine, today considering the concept of “solidarity.” The pandemic is a clear illustration of the importance of the principle:

The current pandemic has highlighted our interdependence: we are all linked to each other, for better or for worse. Therefore, to come out of this crisis better than before, we have to do so together; together, not alone. Together. Alone no, because it cannot be done. Either it is done together, or it is not done. We must do it together, all of us, in solidarity. I would like to underline this word today: solidarity.

The pope went on to speak of the foundation for solidarity – the fact that as human beings we all have our common origin in God and dwell together in our common home, the “garden planet.” We also have a “common destination in Christ.”

The word ‘solidarity’ is a little worn and at times poorly understood, but it refers to something more than a few sporadic acts – the odd sporadic act – of generosity. Much more! It presumes the creation of a new mindset; a new mindset which thinks in terms of community and the priority of life of all over the appropriation of goods by a few. (Apostolic Exhortation Evangelii gaudium, 188).

This is what “solidarity” means. It is not merely a question of helping others – it is good to do so, but it is more than that – it is a matter of justice (see Catechism of the Catholic Church, 1938-1949). Interdependence, in order to be in solidarity and to bear fruit, needs strong roots in the humanity and nature created by God; it needs respect for faces and for the land.

The pope warned of what happens when there is a lack of solidarity, recounting a medieval story of the “Babel syndrome.”

This medieval account says that, during the building of the tower, when a man fell – they were slaves, weren’t they? – and died, no-one said anything, or at best, “Poor thing, he made a mistake and he fell”. Instead, if a brick fell, everyone complained. And if someone was to blame, he was punished. Why? Because a brick was costly to make, to prepare, to fire… All of this. It took time to produce  a brick, and work. A brick was worth more than a human life.  Every one of us, think about what happens today. Unfortunately, something of the type can happen nowadays too. When shares fall in the financial markets, all the agencies report the news – we have seen it in the newspapers in these days. Thousands of people fall due to hunger and  poverty, and no-one talks about it.

“Solidarity today is the road to take towards a post-pandemic world, towards the healing of our interpersonal and social sicknesses,” the pope stressed. “There is no other way. Either we go ahead along the road of solidarity, or things will worsen. I want to repeat this: one does not come out of a crisis the same as before. The pandemic is a crisis. We emerge from a crisis either better or worse than before. It is up to us to choose. And solidarity is, indeed, a way of coming out of the crisis better, not with superficial changes, with a fresh coat of paint so everything looks fine. No. Better!”