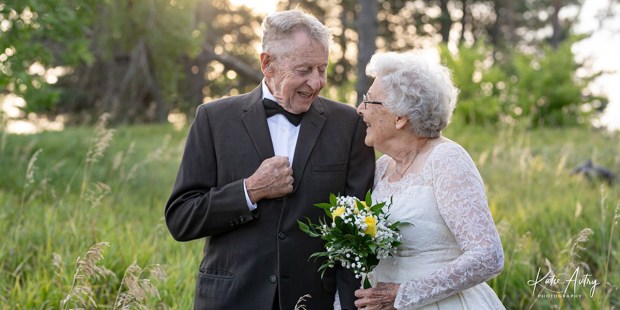 Marvin and Lucille Stone’s photos in their original wedding attire have gone viral.

Marvin and Lucille Stone are reminding us that a long and happy marriage is indeed very possible.
Married in 1960 in Sterling, Nebraska, they recently wore their original wedding attire, including the dress that Lucille made herself, for a special outdoor photo shoot on the occasion of their diamond wedding anniversary. Small Joys News reports that “88-year-old Marvin Stone wore his black tuxedo with a matching bow tie while his wife, 81-year-old Lucille Stone, wore a spectacular hand-sewn lace gown.”
The photos quickly went viral on Facebook. Lucille Stone told Fox News that she and her husband have been “just blown away” by the response.

I had the pleasure of working with Marvin and Lucille to celebrate their 60th wedding anniversary . This may be one of…

Lucille reminisced about the big day six decades ago. “My dad cried. He was the only one that cried,” she said. “My mother beamed and they both thought Marvin was just perfect, and that does help when your parents like the person that you’re marrying,.” she told KHGI-TV.
The couple has three children, and say that good communication and similar values have been key to their long and happy marriage.
“We both had farm backgrounds. We both were free enterprise people and we had similar goals in life, and we were both in teaching,” Marvin told the outlet. “We were just kind of together in our concepts of what to do and what direction to go and so forth.”
“We don’t always agree, but we have the main focus that we’ve always had, so it just kind of moves along,” Marvin Stone explained. “We have had similar values and so it has worked out pretty well and, I don’t know, we never spent any time considering separating.”
“From day one we have assumed marriage is forever,” his wife echoed.

Read more:
Prayer to save your marriage