Our Lady of Waiting is remembered with an icon donated by St. Helena, mother of Constantine.

The Lebanese have always had a special devotion to the Blessed Virgin Mary, so much so that she is honored as Our Lady of Lebanon and is the Patron Saint of the country. The reasons for this devotion can be found in the fact that while she was living, Our Lady visited Lebanon with Jesus. In the village of Magdousheh is located a special sanctuary dedicated to the Virgin of Mantara, or Our Lady of Awaiting. This is the place Our Lady stayed awaiting the return of Jesus, who had gone to Tyre and Sidon (cf Matthew 15:21).

Three hundred years later, St. Helena of Constantinople, the mother of Constantine, donated an icon to the sanctuary, which remains there to this day. This place is now called the Shrine of Our Lady of Mantara (Our Lady of Waiting).  Melkite Catholics live in the village and care for the Shrine.

Read more:
Pope calls globe to unite in prayer for Lebanon on September 4

Work finished on May 3, 1908.  During the inaugural Mass at the site of the Shrine, the Maronite Patriarch declared that the Blessed Virgin Mary would bear the title Queen of Lebanon. To this day, the Anniversary of Our Lady of Lebanon is celebrated on the first Sunday of May at the Harissa Shrine,  the Notre Dame du Liban.

The Shrine has drawn millions of faithful, both Christian and Muslims (Muslims also have a devotion to Mary). In 1954 Pope Pius XII sent Cardinal Angelo Roncalli to the Shrine on the 100th Anniversary of the establishment of the Dogma of the Immaculate Conception. Cardinal Roncalli would become Pope John XXIII. The Shrine was also visited by Pope St. John Paul II on May 10, 1997, in his efforts to support Eastern Catholicism and evangelize the youth.

The Harissa Shrine is considered one of the most significant Marian shrines in the world. The focal point is a giant, 15-ton bronze statue, which is 8.5 meters high (approximately 27 feet) with a diameter of five meters (about 16 feet). The Virgin Mary extends her hands toward the capital city of Beirut. The statue is on top of a hill 650 meters (almost 2000 feet) above sea level.

There are stories of miracles that have taken place at the Shrine.

Here is just one: A woman was leaning back over a railing to take a picture of the magnificent statue of Our Lady looming above her. She began to lose her balance and slip over the rail when a young man reached behind her and pulled her forward, saving her from impending disaster. They began to talk.

The young man said his name was Faidi and that he and his mom were very devoted to Our Lady of Lebanon. Faidi’s mom said that she was unable to have children but four days after praying to Our Lady, she found out she was pregnant. She and her son have visited the site on Faidi’s birthday every year since.

Our Lady of Lebanon, the Lady of Waiting, pray for us, and especially pray for your beloved Lebanon.

Read more:
Lebanon, the Christ of the Middle East

See images of Our Lady of Lebanon here 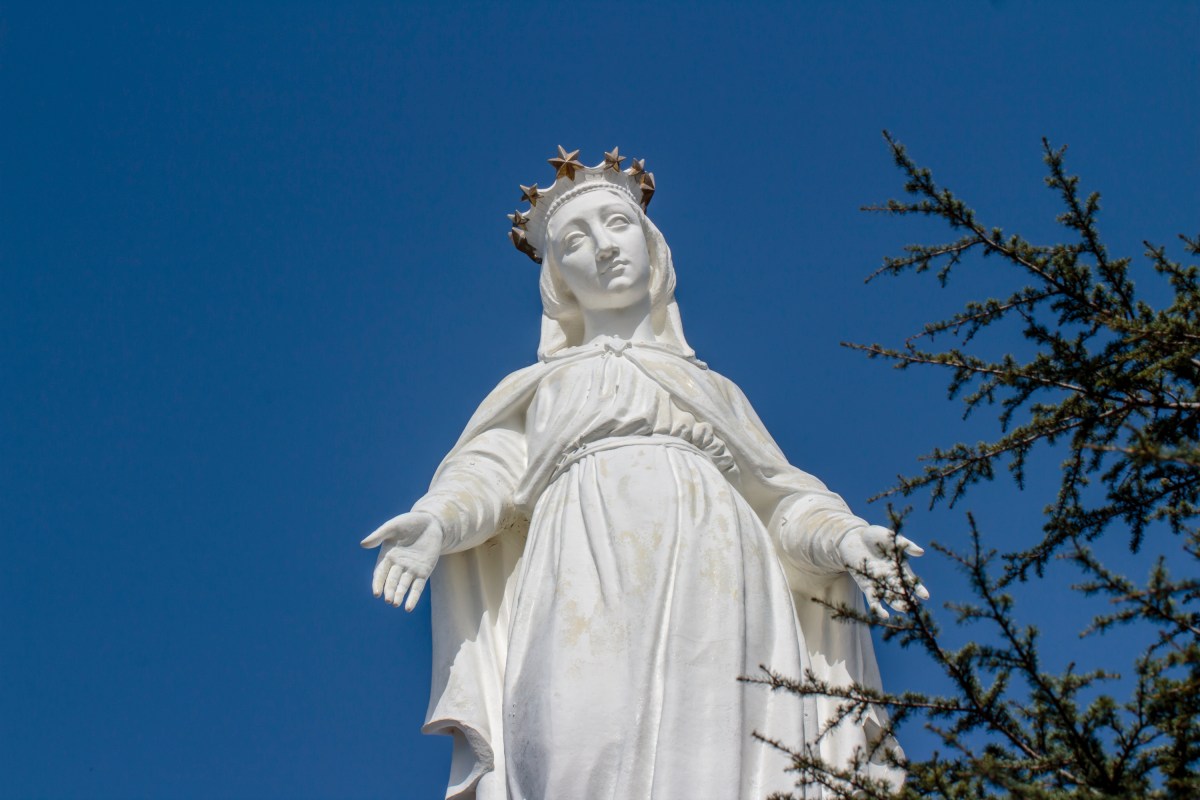