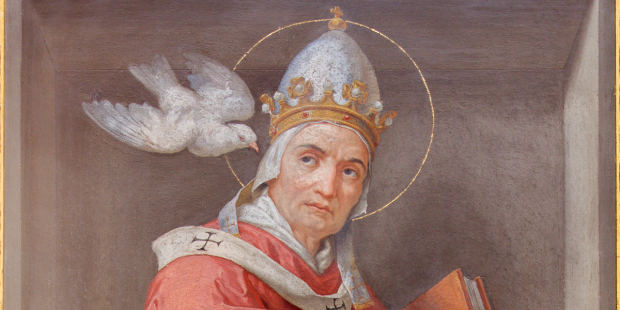 Gregory the Great was sure he didn’t have what Rome needed, especially as the needs were so great.

He had great wisdom and wrote wonderfully. Pope Gregory I (590-604) allowed 6th-century Italy to breathe, after years of conflict and plagues. However, he found himself at the head of the Church against his will. In fact, before taking his place on the throne of St. Peter, he tried to flee.

Caelian Hill, Rome, 590. Well into the night in and around Rome, there are those who still are not asleep in the Monastery of St. Andrew. Fr. Gregory prepares his luggage, illuminated by a small candle: very few clothes and many books. He must hurry. The escort who will take him to Rome will not be long in coming.

Who had the crazy idea of choosing him as the successor of the Holy Pontiff? He, a little monk of no significance at all? But people don’t care what he thought about it. Even the letter he sent to the emperor to defend his case was intercepted. Having finished packing his luggage, the monk takes his bags and leaves the monastery on tiptoe.

He takes the path that descends from the hill in the opposite direction of the city of St. Peter’s throne. Fortunately, the light of the full moon gives him good visibility. With luck, he will reach the village before dawn.

In short order, he hears the clip-clop of a small donkey on which a familiar person is riding. The rider urges his mount silently until he catches up.

“It’s too late for a night walk, don’t you think?” asks Father Valentine, slowing down the donkey.

Of course, who besides Valentine, a faithful friend and Father Superior of the monastery, could have guessed exactly where he was going? Gregory knows that he can’t run away, weighed down as he is. But he doesn’t stop.

“You know as well as I do that I’m not worthy of this task. I’m not even a bishop. I chose the monastic life to serve God in humility and peace.”

To Gregory’s surprise, Valentine doesn’t try to reason with him or stand in his way. On the contrary, he dismounts from his donkey and walks beside him.

“However, you refuse to follow the path where God is sending you,” Valentine replies.

“It was not God but men who chose me.”

“Your clarity of mind has made you the best apocrisian (representative of the Church of Rome) in Constantinople. Rome is in danger. Your gifts to mediate these conflicts are necessary. Don’t you understand?”

Valentine’s words do not leave Gregory indifferent, but he resists believing that he is the one that Rome needs. The flooding of the Tiber, the plague, the Lombards waiting for the opportunity to attack again … What can he do to end this chaos?

“I’m only good at praying and writing pious works. How can I do this from the throne of St. Peter?”

“If I understand you correctly, you want to serve God but only in the way that best suits you? Careful, Gregory: this hardly sounds like humility. Remember to serve the Lord according to his will, not your own.”

These words awaken in Gregory the memory of his consecration to God, and finally he stops. His vow was not only a vow of service, but also of obedience. Whether it was out of fear or desire for comfort, this escape would make him even more unworthy of God than he had already been. Ah, what a fool! He blushed with shame before the God he loves so much.

Yet, his anguish does not leave him. Certainly, with his experience as an advisor to the late pope, he knows what to expect, but he cannot imagine how to resolve such conflicts.

“Do not be afraid,” his faithful friend tells him. “You will never be alone.”

Shouts are heard on the top of the hill and torch lights appear near the monastery. They are searching for him to accompany him to Rome.

“Lord,” he prays in his heart, “I will go wherever you want. So, please don’t abandon your unworthy servant.”

Despite his initial reluctance, Gregory never failed in his duty as pope. He died on March 12, 604, and was canonized 50 years later, after a life of devotion to the sick, liturgical reforms, peace negotiations, and spreading the faith to new frontiers.

Along with St. Augustine, St. Ambrose and St. Jerome, he’s one of the first doctors of the Church. By taking his place on the throne of St. Peter, this pope became a servant of all.