Pope to sign new encyclical in Assisi on October 3 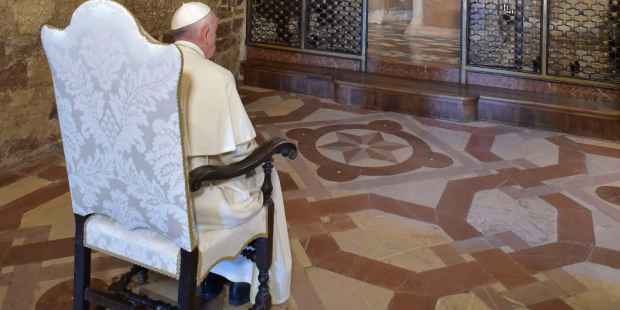 The document will focus on human fraternity.

Update: On September 16, it was announced that the encyclical will be released October 4, feast of St. Francis of Assisi.

Pope Francis will celebrate Mass on October 3 at the tomb of St. Francis in Assisi, for the vigil of the saint’s feast day. After the Mass, the Holy Father is expected to sign a new encyclical, dedicated to the theme of human fraternity, and reflecting on how we are all brothers and sisters, children of the same God who created us all.

According to Bishop Domenico Sorrentino of Assisi, the pope’s message is essentially that the pandemic has emphasized how we share a common vulnerability, and we must respond with a common effort to love one another.

Matteo Bruni, director of the Vatican press office, confirmed that the document will address the themes of fraternity and social friendship, and said it will be called “Fratelli Tutti” in Italian, meaning “we are all brothers and sisters.”

The pope’s visit to Assisi will be private, with a 3 p.m. arrival for the Mass.

Pope Francis is the first pope in history to take the name Francis, inspired by St. Francis of Assisi.

In the last few weeks, the Holy Father has been speaking about human fraternity in light of Catholic social doctrine. It also is expected that the encyclical will develop themes from the jointly-signed “Document on Human Fraternity for World Peace and Living Together” presented by Pope Francis and the Grand Imam of Al-Azhar Ahmed Al-Tayyeb on February 4, 2019.

This gesture by the current pope echoed the peaceful meeting of St. Francis of Assisi and Sultan Malik Al-Kamil in Egypt in 1219.