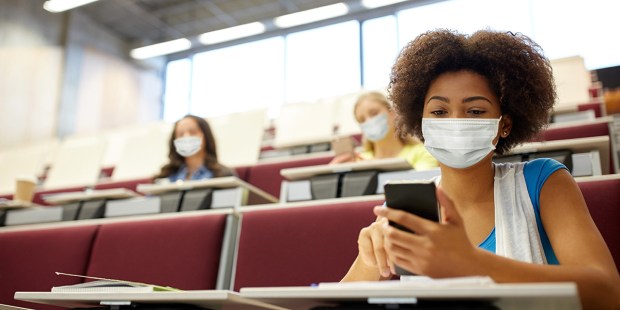 More than 1,000 students at the University of Alabama have tested positive for COVID-19 since classes resumed on the Tuscaloosa campus two weeks ago, according to CNN. Coronavirus outbreaks have been identified in four sororities at Kansas State University. Officials at the Rochester Institute of Technology in New York are testing the sewage of 15 dormitories and on-campus apartment buildings twice a week for genetic evidence of the coronavirus in human waste, the New York Times reported.

Two Catholic universities, one in the U.S., the other in Rome, are protecting students in a much less, er, messy way.

At St. Mary’s University of Minnesota, administrators are confident that in-person education this fall will be relatively safe, thanks to new technology being used in dormitories and classrooms. The university, which has campuses in the Twin Cities and Winona, has installed air purification systems that are said to be able to deactivate viruses.

“These systems will significantly contribute to the health and well-being of our students, faculty, staff, and visitors by purifying the air and surfaces of harmful materials, including viruses,” Fr. James P. Burns, IVD, president, said in a video on the university website. He said the university installed 860 Intellipure air purification units, made by Healthway, in each sleeping room of all the residential buildings on its Winona campus. The device “deactivates” viruses, bacteria, mold and fungi, he said.

Burns said the university also acquired eight AirPHX devices that kill bacteria and germs in the air and on surfaces, to be placed in large community spaces.

Ann E. Merchlewitz, Chairwoman of St. Mary’s Pandemic Assessment and Coordinating Team, said that the university had started investigating the use of the air purifiers and other technology prior to the COVID-19 pandemic “as part of our overall commitment to healthy living and wellness for our students.”

Delos, a wellness real estate and technology company, is supplying the devices to St. Mary’s and helping the university with financing.

“To be clear, there is no current evidence that the Delos technology works to mitigate against the transmission of COVID-19,” Merchlewitz told Aleteia. “However, the Intellipure air purifiers we are using offer professional grade air cleaning for smaller spaces by deactivating virus, bacteria, mold, and fungi through an enhanced filtration system. By reducing pathogens generally found in the air, we hope to reduce the likelihood of transmission of a variety or air-borne viruses.”
Delos is also providing Rabbit Air purifiers at the Pontifical Oriental Institute in Rome, which specializes in studies of the Eastern Christian Churches.
“Does it eliminate the possibility of COVID-19? No, but it reduces it by a massive, massive percentage,” said Jesuit Fr. David Nazar, rector. Delos also provided various amenities for the bedrooms of the Jesuits who work at the Oriental Institute, and the community/recreation room.

The Delos Labs team “has rigorously vetted and selected these solutions because they’re best in-class,” according to Matthew Harvey Sanders, head of Longbeard, a digital marketing and design agency. “Delos also secures special pricing due in part to the large volume it buys and these cost savings are then passed onto Delos’ clients, which saves them a lot.”

Sanders said that Delos has secured about $100 million in financing (from their own capital) for the “faith sector to help colleges/universities and nursing homes make these air quality and other health and safety upgrades.”

“So, they’re not donating them, but instead providing them capital to secure the equipment (to own, not lease) and then providing generous financing options so they can defer the costs of the capital expenses over the course of years,” he said. “One of the major problems that colleges/universities expressed is they didn’t have budgets to make large capital expenses for upgrades like air quality, and so this is why Delos put together this financing option.”

Sanders said that Humanity 2.0 Well-Being, the health and wellness arm of Humanity 2.0, which works to remove impediments to human flourishing, worked with Delos to help identify “colleges with forward thinking leaders who we knew would see the wisdom in making such an investment in their students’ health and wellness.”

Sanders said that before COVID, Delos was already working to address “the mental health crisis with students.” Their Student Health and Wellness program covers areas such as nutrition, natural lighting, air quality, ergonomic furniture, and aromatherapy. It also has a Guided Meditation component from Chopra.

At the Oriental Institute, Fr. Nazar said Delos has supplied a large reclining chair for “mind breaks,” as well as circadian lighting alarm clocks, LED lighting that’s tinted and varies in intensity, aromatherapy, and sound therapy, in residential rooms. “You can imagine, there was a certain skepticism among a number of the Jesuits,” he said. “Some come from Eastern Europe, India, North America. There’s a bit of scratching your head, saying, ‘What is this stuff?’ But I could show that the science was there, show that these things were tested in the Mayo Clinic, I could give them statistics and studies and all this kind of stuff.”

Nazar said the amenities have made a difference in his own health.

Other companies have also put forward ways to protect people from the coronavirus. AltaPure, based in Mequon, Wisconsin, has developed the AP-4 machine that the company says can eliminate all pathogens, including the coronavirus, from a room by emitting a fog of water and a PAA cleaning agent.

“There are two commonly employed methods to sanitize and disinfect areas from bacteria and viruses — chemicals or ultraviolet radiation exposure,” Science Daily said. “The UV radiation is in the 200 to 300 nanometer range and known to destroy the virus, making the virus incapable of reproducing and infecting.”