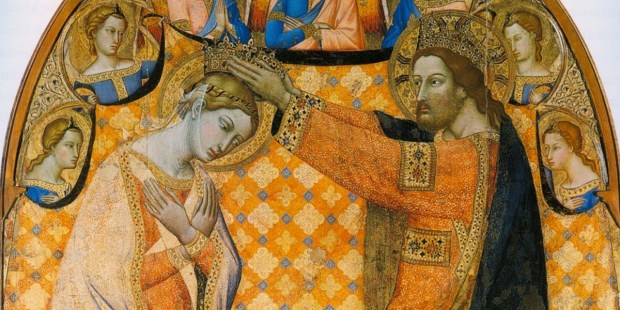 This incredible work of art was installed at Vancouver’s Chapel of the Annunciation.

The Coronation of the Virgin has long been a popular topic for visual artists to test their skills, with dozens of examples of the scene immortalized in Catholic art from as far back as the 13th century. Even with so many depictions of the scene, however, some trends never go out of style and now there’s a new, awe-inspiring version that has been installed in Vancouver’s Chapel of the Annunciation.

B. C. Catholic reports Canadian iconographer Patricia Ballard labored for three years and two months to complete this epic 33.5 inch by 55 inch icon. Ballard, a trained artist who has devoted herself to sacred works since 1999, told the publication that she only used materials that were traditional to icon writing, such as egg tempera paint, rabbit skin glue, and gold leaf.

The scene is a recreation of the piece created by Jacopo di Mino del Pellicciaio in the 14th century. The icon shows Christ the King crowning Mary as queen while seven archangels watch from windows overhead, and a heavenly host can be seen providing celebratory music at the Blessed Mother’s feet.

Every inch of the icon is worthy of close inspection. The faces of the figures contain extremely high levels of detail, while every fold of their garments is beautifully shaded. We especially appreciated the way Ballard marbled the coloring of the background setting, a complex task that added a tremendous amount of texture to a piece that is packed with highly skilled artistic elements.

Ballard called the work “the most complex” that she has ever completed, citing the fabric and veil as some of the most challenging aspects of the piece. The entire border of the work was expertly covered in gold leaf, while the crowns on the heads of both Christ and Mary feature real Swarovski crystals, which protrude from the piece and give it a lustrous quality.

The artist went on to explain that she would often listen to the works of Hildegard von Bingen when she was in the mood for music, or would use silence as a time of prayer while she worked tirelessly on the icon. Of the work, she told B. C. Catholic:

“She is, in her being, what God has promised for us: that our bodies and souls will be joined together in paradise. We are destined to live together with God in his glory,” she said. “It’s hopeful. When you see this image, you see this perfect being, perfectly reflecting Christ. It’s something we strive for … it’s the call for holiness in us.”

Read what Archbishop J. Michael Miller had to say about Ballard’s icon at B. C. Catholic.