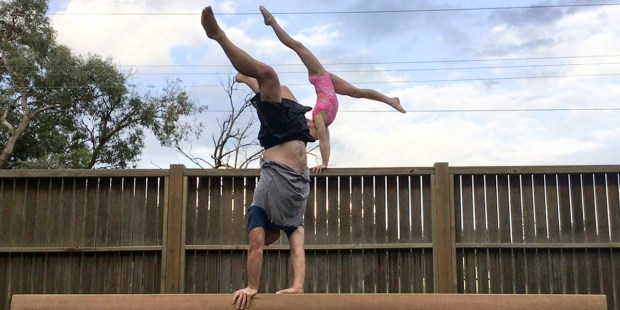 This father went to incredible (and hysterical) lengths to get involved in his daughter’s dreams.

There’s something really adorable about a dad getting involved in his daughter’s extra-curricular activities. Whether it’s seeing him hit the stage to join in his stage-struck child’s dance routine, or training with his daughter to give her confidence, support, and most importantly, his time, it’s beautiful to witness.

So when a video of young gymnast named Alex and her dad Ash was posted on Facebook, it’s no wonder it was so popular. In the video you can see Alex completing some truly remarkable gymnastics routines, followed by her dad Ash doing his best to copy his athletic daughter. And the results … well, let’s just say Ash gets top marks for effort!

In fact if you take a look at the video, you’ll see that not only is the dad doing okay, he’s also provided his daughter with top-notch sporting facilities in their home to train. Now that’s a father-daughter bond to cherish.

Read more:
Bride plays video of father-daughter dance with her dying dad at her real wedding