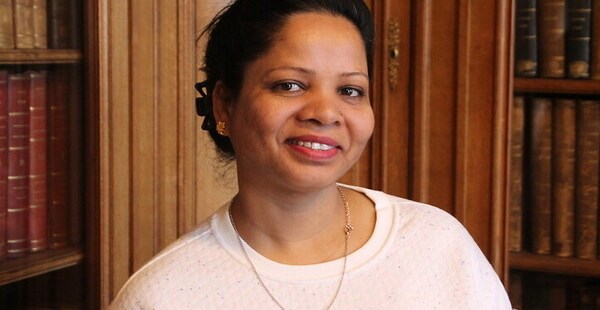 The Christian mother who was on death row for ten years before being acquitted of blasphemy charges says that she prays every day with the rosary Pope Francis gave her.

In a video interview she granted Aid to the Church in Need (ACN), Asia Bibi appealed to Pakistani Prime Minister Imran Khan on behalf of the religious minorities in Pakistan, citing in particular the plight of the many underage Pakistani girls abducted, forcibly converted and forcibly married.

The Pakistani Christian wife and mother, who has become a symbol of the suffering inflicted by anti-Christian persecution around the world, spoke from her current home in Canada to Alessandro Monteduro, the director of ACN’s Italian national office.

In their conversation, Monteduro mentions two young Christian girls, Huma Younus and Maira Shahbaz, both victims of such abuse, whose cases are being fought with help from ACN, not least by a constant campaign to raise awareness in the media.

Asia Bibi responded: “I know that these girls are being persecuted and I appeal to Prime Minister of Pakistan Imran Khan, please help our young girls, because none of them should have to suffer like this!”

Another particularly delicate issue concerns Pakistan’s so-called anti-blasphemy laws. As ACN’s own regular report on Religious Freedom Worldwide explains, these so-called “Blasphemy laws,” which were incorporated in 1986 into Pakistan’s Penal Code. They represent a severe restriction on freedom of religion and expression. Defiling of the Koran and making derogatory remarks about Mohammed are crimes punishable with life imprisonment and the death penalty, respectively.

In practice, these laws are frequently used in daily life as a means of persecuting religious minorities. Falsely accused, Asia Bibi herself, a mother of five, was imprisoned on death row for almost 10 years, until October 2018, when her sentence was finally vacated on appeal by Pakistan’s Supreme Court.

“At the moment of the founding of Pakistan and its separation from India, our founder Ali Jinnah, in his opening proclamation, guaranteed freedom of religion and thought to all citizens,” said Asia Bibi. “But today there are some groups which are using the existing laws, and so I appeal to the Prime Minister of Pakistan—especially for the victims of the blasphemy laws and the girls who have been forcibly converted—to safeguard and protect the minorities, who are also Pakistani citizens.”

“As a victim myself, I am speaking from my own experience. I suffered terribly and lived through so many difficulties, but now I am free and I hope that these laws can be changed in such a way as to prevent any abuse of them.”

Asia Bibi also spoke about Pope Francis. “I have two sets of rosary beads given to me by the Holy Father,” she said. “One was left behind in Pakistan and the other I still have with me and with it I pray the Rosary every day for the gift of faith and for those who are persecuted in Pakistan.”

“I thank the Holy Father Francis, and also Pope Benedict who interceded for me as well, and I thank ACN and all the other people who prayed for me.”

Read more:
Pope to Asia Bibi’s daughter: I often think of your mother, and I pray for her

Monteduro, speaking on behalf of ACN, invited Asia Bibi and her family to come to Rome, an invitation she was delighted to accept. “I have a deep desire to come to Rome and, if possible, to meet with the Holy Father,” she replied, adding: “I pray for Pope Francis, that he may sustain us in our faith.”

Asia Bibi concluded with some words of thanks to ACN donors: “I am grateful to ACN and to all your benefactors, in Italy and all over the world, for supporting people like me who are persecuted on account of their faith.”

In an Aug. 31, 2020 interview with Voice of America, Asia Bibi appeared to disassociate herself from her forthcoming autobiography. But sources who spoke with her suggested to ACN that the interview, as presented, likely did not accurately present her views. Asia Bibi “believes that the heavily edited interview may have been misinterpreted and gave a false and confused picture of what she actually said,” one source said.

This article was first published by Aid to the Church in Need (ACN) and is republished here with kind permission. To learn more about ACN’s mission to help persecuted Christians visit www.churchinneed.org