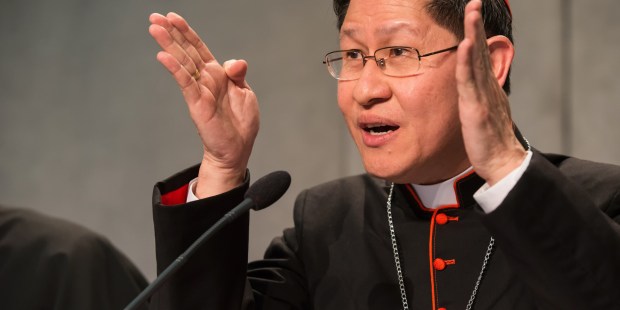 Test given upon arrival in Manila comes back positive; cardinal has no symptoms.

The Vatican press office on Friday confirmed that Cardinal Luis Antonio Tagle has tested positive with Covid-19 after a swab test.

“Cardinal Tagle tested positive of Covid-19 with a pharyngeal swab carried out yesterday on his arrival in Manila,” said a brief statement by Matteo Bruni, the  Director of the Holy See Press Office.

Thus the Philippine cardinal who is Prefect of the Vatican Congregation for the Evangelization of Peoples as well as President of Caritas Internationalis, the federation of Catholic charities worldwide, becomes the first head of a Vatican dicastery with Covid-19.

Read more:
This Filipino cardinal could one day be pope; for now, he tells us how he nearly missed being a priest

Responding to journalists, Bruni said the cardinal “does not have any symptoms and will remain in mandatory self-quarantine in the Philippines, where he is located.”

“In the meantime,” Bruni added, “necessary checks are being carried out among those who have come into contact with His Eminence in recent days.”

He said Cardinal Tagle has undergone a swab test in Rome on September 7, which turned out negative.

Read more:
In Italy 109 priests have died of coronavirus