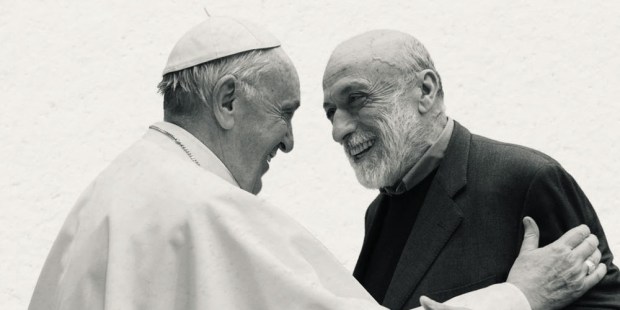 We must have dialogue with anyone open to it; there must be “dialogue as a method,” says pope in new book-interview.

Christians should seek dialogue with “pious agnostics,” according to Pope Francis, meaning non-believers who are open to engaging, and distinct from “devout atheists,” who dogmatically deny the existence of God and refuse to dialogue.

This is a summary of his thought offered by a fellow Jesuit, editor of the Jesuit journal Civiltà Cattolica, Father Antonio Spadaro. Father Spadaro was speaking September 8 at the presentation of a new book-interview that the pope did with a non-believing Italian journalist, Carlo Petrini. Petrini is known for his international grass roots movement called Slow Food, an effort to protect local food markets and oppose the fast food culture, as well as to recognize “the strong connections between plate, planet, people, politics and culture.”

The book, called TerraFutura, is a “good introduction to the reading of what will be the pope’s third encyclical,” Father Spadaro maintained, referring to the document the pope is expected to sign on October 3, regarding human fraternity.

Petrini focused the interview on the pontiff’s singular position with regard to “cultural biodiversity.”

Accompanied during the presentation by Bishop Domenico Pompili, Bishop of Rieti (Italy), who wrote the preface to the book, and Fr. Spadaro, the author emphasized the importance the Pontiff gives to “human fraternity” and “social friendship.”

In the interviews, the author says, the pontiff welcomes the initiatives of “civil synodality” and calls for building dialogue between believers and non-believers.

“True secularism is humanistic,” the pope told the founder of Slow Food. He denounced the conception inherited from the Enlightenment of faith and reason as two irreconcilable parallel worlds.

As early as 2015, Fr. Spadaro said, the Supreme Pontiff insisted on the importance of “human fraternity” in his address to the young people of the Father Félix Varela Cultural Center during his trip to Cuba. He recounted how a parish priest in Buenos Aires introduced him to a group of young university students who were building parish centers. “Here is the architect, he is Jewish; here is a Communist, here is a practicing Catholic, here is …”

Read more:
Pope Francis: “True love is not only expansive; it is inclusive”

The pope confided to Petrini that it is above all a question of encouraging the sharing of “traditional knowledge” and “academic knowledge,” as both have much to contribute.

“The Church has moved forward through tears, through leaps and bounds,” says the Supreme Pontiff in TerraFutura. For this reason, Fr. Spadaro continues, “we must kindle the discussions” so that new steps can be taken in the direction of human fraternity.

Read more:
Pope at Youth Center: What Kind of Hope Does a Young Cuban Have?