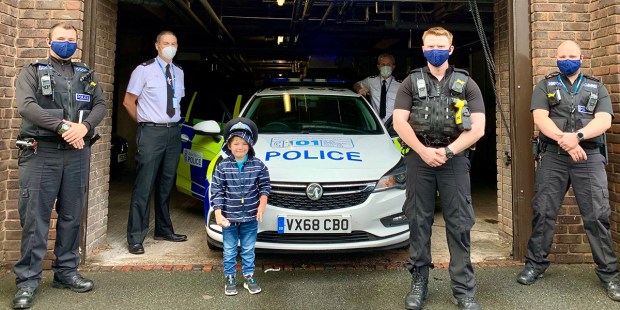 He had never made a phone call before, but his quick thinking made all the difference.

A little boy of only 5 years old became a hero in the small town of Telford, in Shropshire County, England. Last month, he was at home playing with his younger brother Harry and his mother Caroline, who has diabetes, when his mom fainted and went into a diabetic coma.

Little Josh Chapman, instead of panicking, went looking for candy to increase his mother’s sugar levels, but the jar was empty. Then he noticed that there was an emergency phone number (112, the European equivalent of 911 in the USA) stamped on the European-style ambulance he was playing with.

Even though he had never made a phone call before, the boy dialed the number, explained to the operator what had happened to his mother, and gave them their home address. The police were able to locate them and send paramedics in time. “Mummy was playing cars and then her eyes closed,” Josh told the paramedics, according to Caroline, 41, as reported in the Daily Mail.

The quick thinking actions of a 5-year-old boy from #Telford helped to save his mum's life after he dialled emergency services when she fell unconscious. Brave Josh rang 112 – the number on his toy ambulance and the single European emergency number.

“I had just been playing cars with the boys and I suddenly blacked out. I woke up surrounded by paramedics—and a lot of toys—and they explained to me that Josh had called them and given them our address,” she told the British news outlet.

“I couldn’t quite believe it. He has never used a phone before. He had looked at the number on the side of his toy ambulance and dialed 112. I didn’t even know that number was on there but it worked and I am so proud of him. Usually I feel my levels dropping but this time I didn’t.”

The boy’s father, Neil, 40, arrived home to see the street filled with police and ambulances. A neighbor came forward to explain what had happened and the father was surprised at how quickly and well his son had reacted.

“This was an incredible thing for Josh to do,” said local police superintendent Jim Baker on the police department’s website. “His quick thinking saw him ring the number on his toy ambulance as he was worried about his mum. He was very brave and stayed on the line while we were able to get to the family’s home and make sure his mum got medical assistance.”

At the invitation of the officers, Josh later visited the local police station and had the opportunity to meet the entire police team. “Josh has already proved he would make a brilliant police officer in the future. Hopefully we’ll see him again when he’s old enough as a new recruit!” joked Baker.

Read more:
5-year-old boy pulls little sister out of window and saves his family from fire