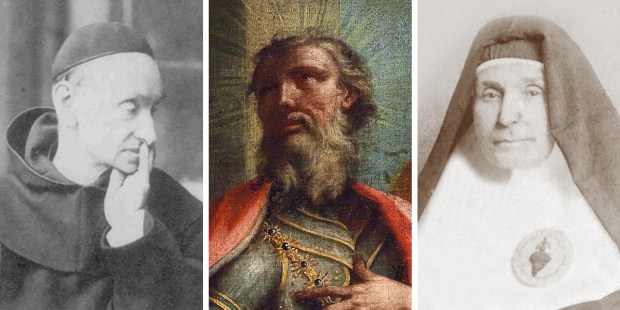 Sometimes life is complicated. There’s still a chance to find holiness in it.

Saintly family life can often seem to be simple and straightforward, a linear arrangement of parents and grandparents. But in reality, many saints were part of blended families, raised by stepparents or raising stepchildren. And while some of these may have followed the “wicked stepmother” trope rather too closely, there are many others who had holy, sanctifying relationships with their stepfamilies. Those of us navigating the complexities of life with stepparents or stepchildren have many intercessors whose lives show us that happiness and holiness are possible in families like ours.

St. Leopold III (1073-1136) was the ruler of Austria and father of an enormous family. Though he had only one child with his first wife, after her death he married Agnes of Germany, herself the mother of 11 (at least eight of whom were still living at the time of her marriage to Leopold). Together, the couple had another 11 children. In addition to governing his country and raising his family, Leopold founded several monasteries. He was father to two bishops, stepfather to an abbess and a king, and stepgrandfather to the Holy Roman Emperor, Frederick Barbarossa.

Bl. Seraphina Sforza (1432-1478) was married at 16 to a widower named Alexander. She became a wonderful mother to her two stepchildren and an excellent wife and manager of her household, so much so that when Alexander went to war he left her in charge of all his affairs. When he returned, however, Alexander began a very public affair, causing an outcry from all his household staff and even his own sons, who lamented the mistreatment of their beloved stepmother. When Alexander ejected her from the house, Seraphina went to the Poor Clares, where she eventually made vows. Alexander was finally converted and came crawling back. But while Seraphina had forgiven him, it was too late for him to expect her to return. Alexander lived a solitary life of penance and preceded her in death. Seraphina continued a saintly life as a nun and eventually an abbess.

Read more:
A stepfather, adoptive father, and biological father, Thomas More is a model for all dads

Bl. Columba Kang Wan-suk (1761-1801) was born out of wedlock to a noble family. After becoming a wife and stepmother to Bl. Philip Hong Pil-ju, she became a Catholic and brought her stepson, parents, and mother-in-law to Christ, though her husband ridiculed her and ultimately left her for a concubine. When his father left his stepmother, Philip chose to remain with Columba, both because he shared her faith and because he loved her. With her husband gone, Columba’s house became a hub of activity for the underground Church. Eventually, both she and Philip were arrested; when he was dangerously close to apostatizing under torture, his stepmother passed by and said, “My son Philip, do you not know that Jesus Christ is with you to help you and to enlighten you? Why do you want to go the wrong way?” Encouraged by the woman he had so long honored as his mother, Philip endured unto martyrdom, as did Columba.

Bl. Catalina de Maria Rodriguez (1823-1896) felt a call to religious life at a young age, but a bad spiritual director insisted that she marry a childhood friend of his, a man who insisted that he would kill himself if Catalina wouldn’t have him. Though this was emotional abuse, Catalina’s spiritual director erroneously declared that the man’s blood would be on her hands if she didn’t marry him. So Catalina married the widower and became the stepmother of his two children. These two brought her great consolation in the loss of her only child, a daughter who was stillborn, and taught her how to be a mother. After the death of her husband, Catalina founded an order of women religious in Argentina, which remains active to this day.

St. Cecilia Yu So-sa (1761-1839) was wife to Bl. Augustine Chong Yak-jong, stepmother to Bl. Charles Chong Cheol-sang, and mother to St. Paul Chong Ha-sang and St. Elizabeth Chong Chong-hye. Converted by her husband, she made the faith her own in the years that they were married. When Augustine and Charles were martyred in 1801, Cecilia remained steadfast, raising her seven- and five-year-olds in the faith despite the struggle of being an impoverished widow and an object of disdain as a Christian. Paul later became one of the leaders in the Korean Catholic Church and was martyred in 1839, as were his mother and sister.

St. Raphael Kalinowski (1835-1907) lost his mother when he was just a baby, then his stepmother when he was 10. His father’s third wife became a great influence in his life, encouraging him spiritually as well as in his remarkable academic career. During his time as a student, a math professor, and a railway engineer, Kalinowski fell away from the faith. Finally, his younger sister and his stepmother told him they would only get a particular gift for a friend of his if he would go to confession. Though not at all eager, Kalinowski went; in that moment, he experienced profound grace, mercy, and fullness of conversion. He went on to be the Minister of War for Poland during the January Uprising, then spent a decade in a Siberian salt mine before finally becoming a Carmelite priest

Read more:
How to keep peace with your husband’s ex