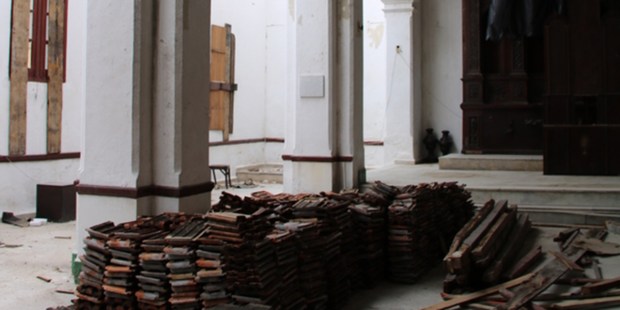 The Friars of the Order of Our Lady of Mercy (Mercedarios) in Havana, Cuba, are struggling with poverty and the aftermath of last year’s hurricane.

The night of January 27, 2019, is one that Fray Gabriel Avila Luna will not easily forget; there were moments when he thought it might have been his last. Winds of close to 200 miles an hour ripped through parts of Havana. For around 16 minutes, the friars living in the parish of Jesús del Monte hovered between life and death. The hurricane tore through a swath of territory some 12 miles long and a third of a mile wide, taking the lives of four people.

“It sounded like a military bombardment, there were sounds like gunshots going off and we really thought we were going to die,” recalls Brother Rodolfo Rojas. “There are still bits of roof tile from the neighboring houses embedded in the walls of our church and monastery. The fear that something like this might happen again is now something that has entered the very bones of many of our neighbors.” And hurricane season is about to begin.

The hurricane vented its fury on the church especially. “The wooden roof, dating from colonial times, and the rubble stone walls were irreparably damaged and almost all the benches, statues and other furnishings inside the church were either destroyed or swept away by the force of the wind, which tore open the large door of the main front entrance.”

“The iron cross that surmounted the bell tower was simply ripped from its moorings and fell down like a projectile on the roof above the choir, leaving a huge gaping hole,” explains Eduardo Andrés, the man charged with the reconstruction plans, for which ACN is providing assistance in the coming months.

This repair work is extremely urgent because, as Fray Gabriel explains, “up till now the church and the parish house have been left in a dreadful state and are deteriorating still further by the day. In addition, we have to gather the people together outside the church on Sundays. When the rainy season comes this won’t be possible.”

The friars are extremely grateful to ACN for having promised, along with other organizations, to help restore this historic church and national treasure.

But this young 29-year-old Mexican friar still has sleepless nights, not for fear of a new hurricane, but because as superior of his community in Cuba he cannot see how to resolve the other problems facing the friars. The house the brothers live in had its doors and windows smashed, and in places the floor still gets flooded during the rainy season, when the water comes seeping in everywhere.

“It’s not so much for our sake, but for the three seminarians whom we have, young men who would like to join our community but who are forced to remain at home because of the dilapidated state of our monastery,” says Brother Gabriel.

“We came back to the island in 2012, after being 125 years away from Cuba. Fray Rodolfo was one of the first to make his profession since we arrived here. We live by God’s providence—for our food, medication, personal expenses. But things are very bad in Cuba right now.

“Our presence on the island is at stake, for if we can’t make ends meet, we will have to immigrate to Mexico, since we cannot maintain the mission here. Barring a miracle, we are going to have to abandon Cuba.”

“It would be a great tragedy, because I believe that our charism of redemption, and our presence here, are vital to the people of the area. It would be so sad to have to leave again, but I really don’t know how to avoid having to close down this great mission.”

This article was first published by Aid to the Church in Need and is republished here with kind permission. To learn more about ACN’s mission to help the suffering Church visit www.churchinneed.org