Before dying in a pandemic, he brought the newly established Nashville Dominicans to his school 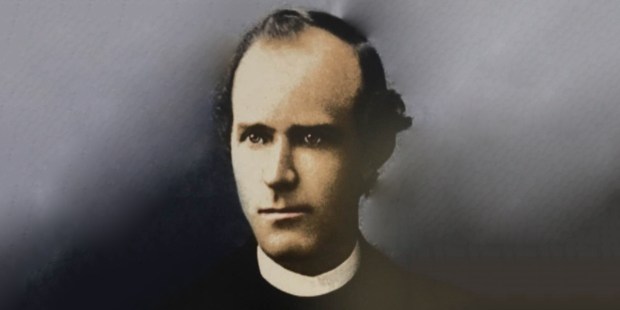 Patrick Ryan was born in 1845, unaware of the hard times his mom and dad endured during his first few years. It was during the time of Ireland’s Great Potato Famine, when his family was evicted from their farm. After selling whatever they could, they managed to make their way to New York City. It was here young Patrick would grow up and eventually answer God’s call to the priesthood.

Patrick was an average student and had to study hard to make acceptable grades. When he was 21, he was able to enroll in St. Vincent’s College in Cape Girardeau, Missouri. Patrick was ordained in 1869 at the Cathedral in Nashville by Bishop P. A. Feehan. Interestingly, the Feehan and Ryan families were close neighbors in Ireland, and this may be the reason Patrick joined the Nashville Diocese.

Father Patrick took charge of the Chattanooga area on July 10, 1872. He had to take care of not only the city but also of the southeastern part of the state. The baptismal register included towns such as Tracy City, Winchester, and Cleveland, where Father Patrick traveled to perform baptisms and administer the other sacraments. Father also was keenly aware that the need for a Catholic school was a prime requirement for the growing population.

The parish had always maintained a school for children. It operated under the supervision of the priest in charge, but all the students were taught by one man or one woman in the basement of the church. Father Patrick had different ideas. He was determined to have a first-class school in his parish to serve the area. He also wanted nuns to be in charge. He headed to Nashville and pleaded with the Dominican Sisters of St. Cecilia to establish new roots in Chattanooga. The Sisters had been in Nashville for 16 years, and the timing was right for them to expand.

On January 6, 1876, four Dominican Sisters arrived in Chattanooga and began their ministry in the area. The first thing they did was open the Notre Dame de Lourdes Academy. This school was located in the former rectory, which would also house the sisters. The regular school remained in the basement until a better facility could be constructed. But the school had a “new life” about it, brought in by the nuns who immediately brought the school to a higher level.

The future of the parish seemed to be filled with hope and unbounded possibility. Father Patrick was a happy man. But as is the way of life, sometimes things do not follow the way we think they will.

A series of disastrous fires consumed the business district of the town. Then a cholera epidemic threatened the entire population. In 1875 a massive flood struck. And now, unexpectedly, only a little more than two years later, the school had to be converted into a hospital and an orphanage. The flooding created a perfect breeding ground for mosquitoes, and yellow fever began to spread like wildfire.

The people of Chattanooga had escaped other plagues and considered themselves somewhat protected by the nearby mountains. The town offered its hospitality to those in neighboring villages as a haven. But people coming into Chattanooga brought the disease with them. Within a few days, the disease was epidemic, and 80% of the population fled. But one person who did not flee was Father Patrick Ryan. This was his home and these were his people. He would never leave them.

Witnesses said Father Ryan was going from home to home in the worst infected sections of the city. His duty was to help the sick and dying and he was going to do that for as long as God gave him the strength. He came down with yellow fever on September 26. He was much sicker on the morning of the 27th, and his newly ordained younger brother, Michael, administered Extreme Unction to his big brother. Father Patrick died on the morning of September 28, 1878. He was 33 years old.

Father Patrick Ryan was fully aware of the danger of yellow fever but tended to his parishioners. He died, giving his life for others. On November 16, 2016, the US Bishops declared that Father Patrick Ryan is a Servant of God and his cause for sainthood has been forwarded to Rome.

We ask Servant of God Patrick Ryan to pray for us all, especially during this COVID-19 pandemic.

Read more:
In Italy 109 priests have died of coronavirus