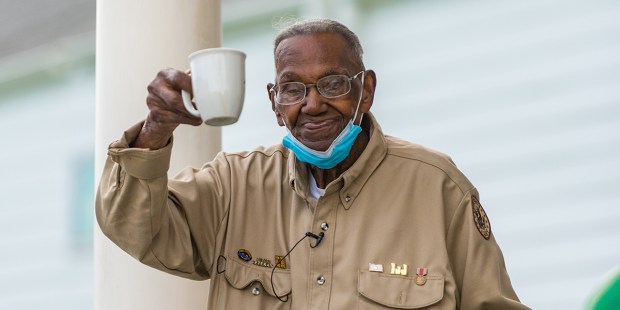 America’s oldest WWII war veteran celebrated his birthday in safety and in style!

Lawrence Brooks is the oldest living American WWII war veteran, and when it was time for this year’s birthday celebrations, the National WWII Museum arranged a special treat to honor his great age and his service to his country.

Bearing in mind the current COVID-19 restrictions, the museum coordinated with the Aeroshell Aerobatic Team and The Big Easy Wing to honor the former member of the 91st Engineer Battalion with a military flyover on his birthday, September 12.

From the safety of his porch, Brooks could enjoy the flyover as well as a rendition of “Happy Birthday,” sung to him by The Victory Belles, the museum’s vocal trio.

Dressed in military attire, America’s senior World War II vet raised a cup of tea (or maybe coffee) and a smile to those who came to wish him a happy birthday.

“It is such an honor to have the oldest living U.S. veteran of World War II living so close to our institution, and it was meaningful for us to continue to celebrate Lawrence Brooks and his incredible life in a safe manner this year,” shared the museum’s Amber Mitchell with Fox 8 News Orleans.

The ex-serviceman was stationed in New Guinea and then the Philippines during the Second World War. As Mitchell explained, many of those belonging to The Greatest Generation are no longer with us, so it’s important to honor the remaining men and women who displayed such courage and sacrifice.

Read more:
WWII veteran keeps a 73-year promise and the moving moment is caught on video